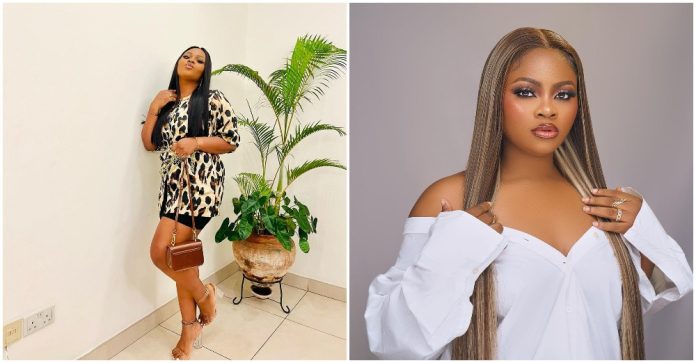 Tega had taken to her Instagram page to share a video of herself stepping out for an event that captured her leg to her face.

A closer look at Tega’s seemed like she had swollen feet, triggering a fan to ask if she was pregnant, and Tega responded in the affirmative with laugh emoji.

In the same vein, another fan spotted that Tega was no longer wearing her wedding ring, and when questioned, the reality TV star knocked the fan urging her to mind her business.

Also reacting to the post, another fan claimed that Tega is no longer in her marriage as she has traded it for fame. See the conversation below:

amebodotcom wrote: Where your wedding ring? Always wear it so that these Lagos men don’t snatch you from your husband. I don’t trust Lagos men, them be baddo

its_tegadominic wrote: @amebodotcom as your name implies, do have a wonderful Sunday

sweet_onos wrote: @amebodotcom she no Dey marriage again, she traded it for fame

In an interview with Media Room Hub, the Shine Ya Eye show winner asked BBNaija organizers to disqualify married people from participating in the show.

Whitemoney also made reference to his co-stars, Boma and Tega’s entanglement on the show to explain the reason behind his opinion.

According to the young man, married people should be scrapped from BBNaija for the sake of the platform.

Speaking further, he noted that married people are also regular human beings and not all of them are strong enough to ignore some distractions.