MaDailyGistGet the Latest Gist in Town
More
GOSSIPGet Daily Gist
More
Home Celebrity/Entertainment After being called out for staging her own wedding, Actress Tayo Sobola... 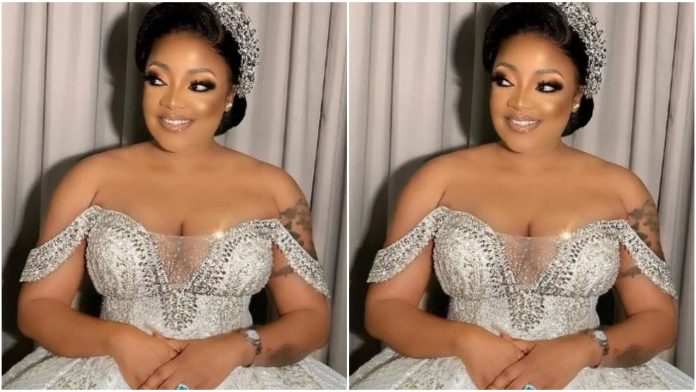 Nollywood actress Sotayo Sobola popularly known as Sotayogaga, has been alleged of staging her wedding, which made headlines earlier in March 2020.

Recall that the actress took to her Instagram page to share a video that captured her in a beautiful wedding dress but failed to reveal who the mystery man is.

Amidst the congratulatory messages, many social media users were curious to know her husband.

However, a controversial Instagram blogger, identified as Gislovers, has alleged the actress staged the wedding to get back at his former boyfriend.

According to the blogger, Sotayo, as she is fondly called, was dating a man identified as AY of London, but trouble started after she got pregnant with him.

The man denied the pregnancy, and the actress aborted the baby. In the bid to cover her shame, Sotayo Sobola staged a wedding shoot to confuse people that she is married.

Meanwhile, the blogger did not mention her name, but many social media users pointed out that the blogger referred to the actress, Sotayo Sobola.

The post reads: Desperation is a weyery. How low, after aunty got preggy for uncle AY of London and that one deny belle, aunty go commot belle, na wetin cause fight be that, just to pepper AY aunty go buy ring, do wedding shoot just to confuse people, all of you tagging unkind of AY London to that make-believe marriage, una don jonz, no marriage anywhere, confusion everywhere, Ayo isn’t maried to aunty, clout, clout, clout, i come in peace. Decoders get in here,who is Aunty,Aunty is who? I come in peace, igi ewedu oni wo pawa o, I Dey my lane o,Ayala a lane minder?‍♀️?‍♀️?‍♀️?‍♀️

___pretty_kelly: @veevyann abi Na Sotayo Gaga,make I no talk sha ??? I always knew something was fishy when she posted just the wedding shoot???likeeeee,even if you no want make we see your husband face,at least kuku snap it like Tianah make you wear mask for am??? 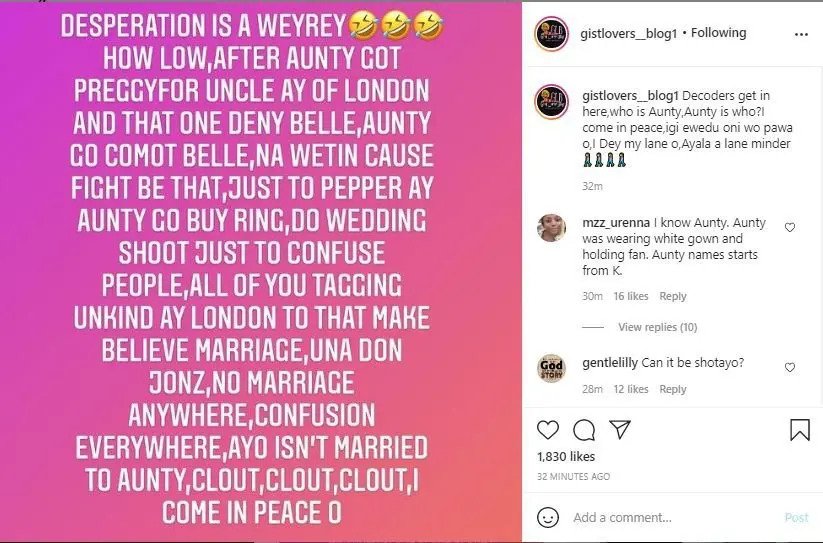 However, in a recent interview, Sogaga as she is fondly called by her close friends and loved ones shocked us more when she said she didn’t actually get married in 2021, but she is truly married and not ready to unveil the identity of the man who stole her heart.

She said, “Yes, I am married. I can remove my rings for you to go and test. I am fully, legally married. And no my husband is not in the entertainment industry. My husband and I have known each other for 7 years and we are now married. However, we didn’t get married this year, but we have been married for a while. I hear people say that I got married six years ago but that’s not true. I kept it secret because I love my personal life to be private. I only posted the photos recently. Sometimes, I just sit back and read some comments on blogs. If you like you can tag anybody you like,  carry shovel, you can’t dig out anything. I can pay you to Investigate all you want, you will not see anything else (laughs).”

On why she brought Bobrisky into the movie industry, Sotayo said, “Nobody wants to do a movie without seeing a good turn out. I actually know Bobrisky from when he was Idris. I know I got a lot of backlash from featuring him then but I don’t care. It was for a purpose which was achieved. Just like someone asking me why I got married? Are you joking, when I wasn’t married nko? What difference does it make? For Idris, I’m one of the few people in the world that don’t discriminate. He was already doing the girly thing when I considered featuring him in my movie. The movie has a message and it was well delivered. I spoke to Bobrisky and he agreed to do it for my movie. Immediately after my film, I saw lots of other people featuring him in their movies. He even had to go to the East to shoot. So, you see, other people tapped into that.”