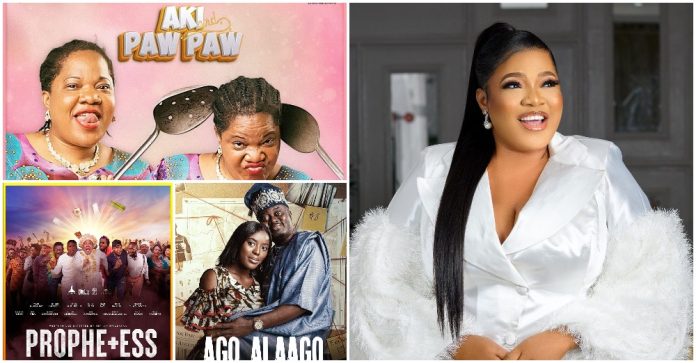 Nollywood actress Toyin Abraham is no doubt one of the most sought after talents in the movie industry and this is evident in how producers often want her to be a part of their projects.

It, therefore, comes as no surprise that the actress had an eventful year that saw her doing what she loves the most and smiling to the bank while at it.

Apart from lending herself to high-budget movie productions, the actress also released her much-anticipated Ghost and The Tout Too movie.

Upon its release, the star-studded comedy received heavy criticisms but it didn’t stop people from trooping to the cinema and making it one of the biggest films of the year.

We compiled a list of financially rewarding movies that the actress featured in this year.

1. Ghost and The Tout Too

Abraham enlisted colleagues Mercy Johnson, Lateef Adedimeji among others for the film which was a second reboot. The movie reportedly raked in over N134 million at the box office.

A post shared by The Ghost and The Tout Too (@theghostandtout)

Although not her movie this time around, Abraham was the lead actress in Niyi Akinmolayan’s Prophetess movie. It was another box office smash that secured the actress with cool cash.

The Nollywood actress launched her YouTube channel in 2021 and the first project was a self-directed film. The movie racked more than 200k views in just 48 hours of release and it went on to become one of her highest-earning films on the platform.

The actress will be smiling into the year 2022 as the Aki and Pawpaw reloaded film is expected to hit the cinemas in just a few days.

In November, the actress and her husband, Kolawole Ajeyemi, came together for another YouTube movie that saw them earning millions in streaming revenue.

There is no denying that the actress put in the work in 2021 and she was handsomely rewarded for her efforts. Congratulations Toyin!