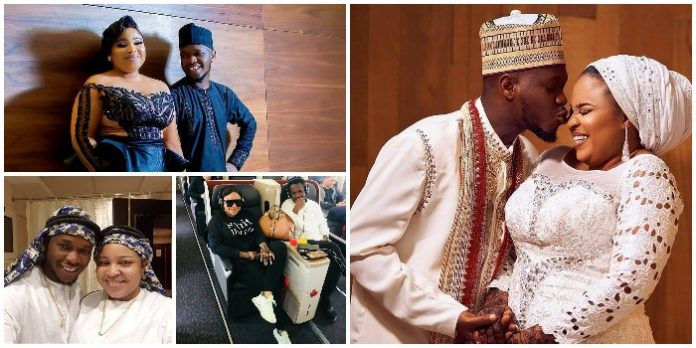 Due to the fact that love and commitment is not enough to sustain a marriage with the news of celebrity marriage no working out.

Some actors are still determined to create an atmosphere of love within the Nollywood industry.

Nollywood actor and film maker Okiki Afolayan have been married to Abimbola Ogunnowo for 2 years now and they have been coping with the sweetness and bitterness of marriage .

For those who don’t know who Okiki Afolayan and Abimbola Ogunnowo Afolayan is you can see more about them below;

He has shot more than 150 films that every Nigerian knows.

Okiki Afolayan was born on the 2nd of February, in state of Kwara.

The childhood and youth of the future director were spent in Mushin part of Lagos state, in Nigeria.

His career began in 1999 when he worked as manager of the under the tutorship of Mr. Olumide Adedayo.

A lot of accolades and the first recognition he received after the release of his first film called Mr. Cola.

If you have not watched it yet, then be sure to spend time watching this movie.

Okiki was in no hurry to make movies one by one. He did it slowly as if he had tasted the director profession.

Bimbo has a daughter named Aliyah whom she gave birth to on July 15, 2013 before she got married to her husband, Okiki Afolayan.

Okiki Afolayan met his future wife on the set. Abimbola Ogunowo made an incredibly strong impression on him.

He immediately saw in her not only a beautiful appearance but also the kindest person and a talented actress.

At first, their communication did not go beyond business relationships, but love is unpredictable, and soon the couple began dating.

They finally came together in marriage on October 3, 2018.

When you look at the wedding photos, you will see that the couple is very happy and does not stop to smile throughout the whole celebration.

The bride was dressed in an elegant white dress with accessories, and the groom was in a blue suit with a wine-coloured bow.

I wish them happy marriage life has a celebrity couple.

“It is not easy at all my brother” – Yinka Afeyele’s Wife, Temitope reveals what she saw, gives Reasons why she married him despite...

‘Mommy Why Na’ – Iyabo Ojo’s Daughter, Priscilla Replies Her Mom After She publicly Called Her This (PICS)

What happened to schools in Nigeria – Ben Murray-Bruce’s son graduates from High school in United States, Nigerians call him out (photos)