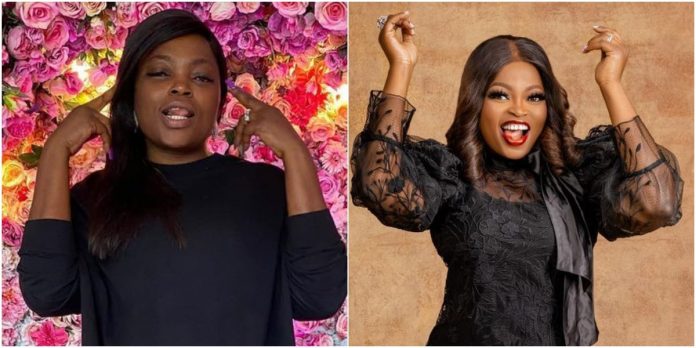 Nollywood actress Funke Akindele-Bello has fearlessly responded to a follower who gave her a prophecy on social media.

The follower called John Omoarkhe took to Twitter to tell the actress what the Lord told him about her. According to him, the Lord said she should not go for any surgery as she will not make it. 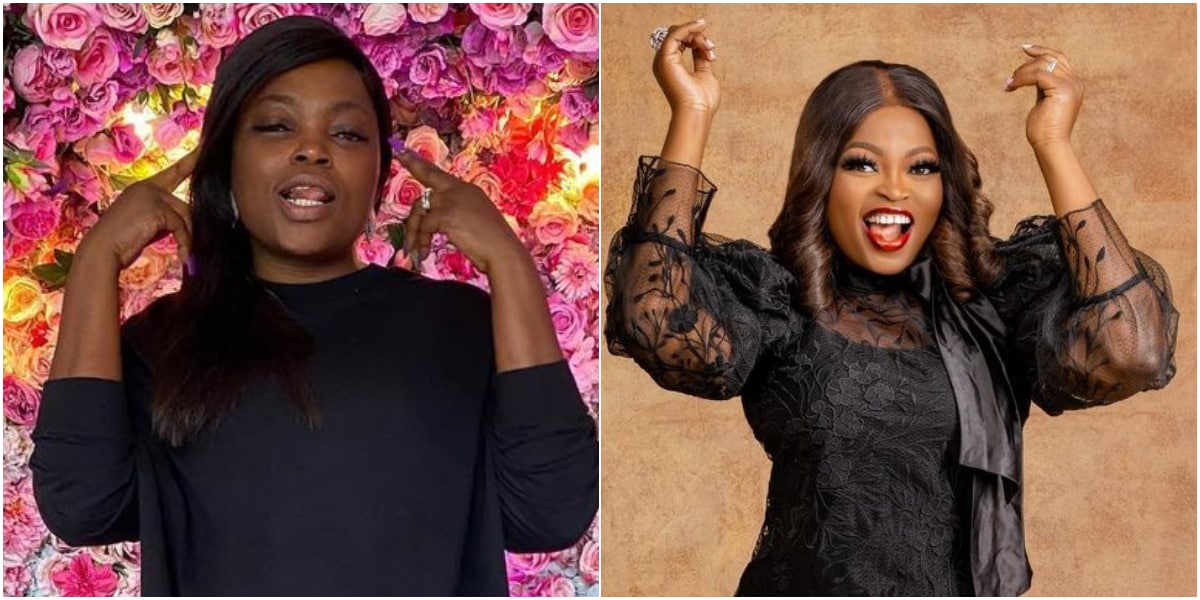 Quoting some bible passages, John told the mother of two boys that obedience is better than sacrifice.

John tweeted at the film star:

“@funkeakindele. Good morning ma. Jesus loves u. Please don’t be offended for I have a message for you. Do not undergo any surgery for the Lord said you will not make it. To obey is better than sacrifice 1sam 15v22 and Jer 7v23. God bless you as you obey. Thanks”

Surprisingly, the film star responded to her follower’s tweet. Funke told John that she has done the surgery already. 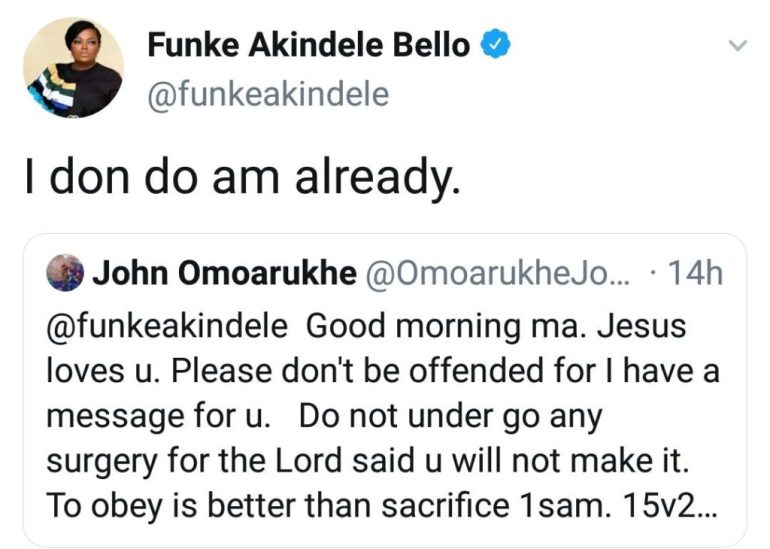 After the actress’ response to his prophecy, John deleted his tweet.

In another news, Popular Nigerian entertainer, Abdulrasheed Bello aka JJC Skillz, was recently engaged in a heated exchange with talent manager, Soso Soberekon, after he posted a photo of himself with the former president of Nigeria, Goodluck Ebele Jonathan. 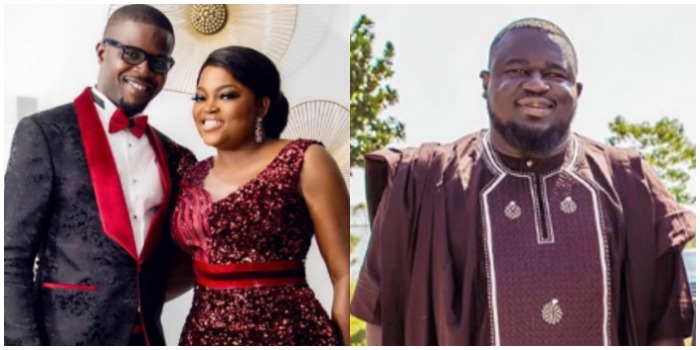 Soso had taken to his page, before editing his caption, to praise the former president and to also apologise to him for how Nigerians criticised him during his tenure.

Actress Funke Akindele’s musician husband, JJC Skillz, took to the comment section to ask Soso why. This was the beginning of what led to a downward spiral between them.

Soso responded that it was because Goodluck was far better than Buhari. He went ahead to claim that JJC’s wife, Funke Akindele, campaigned for APC and Buhari and that they disgraced her.

JJC retorted by telling the talent manager to get his facts right because his wife never campaigned for his friend. He added that Soso was being defensive because he had a hand in ‘chopping Nigeria’s money’.

This led to Soso replying JJC with a very low blow where he said the singer was the wife to Funke Akindele and not the husband.

“No need for insults, your husband Funke is my friend except I go post the video for evidence, gigolo.”

See a screenshot of their exchange so far below: 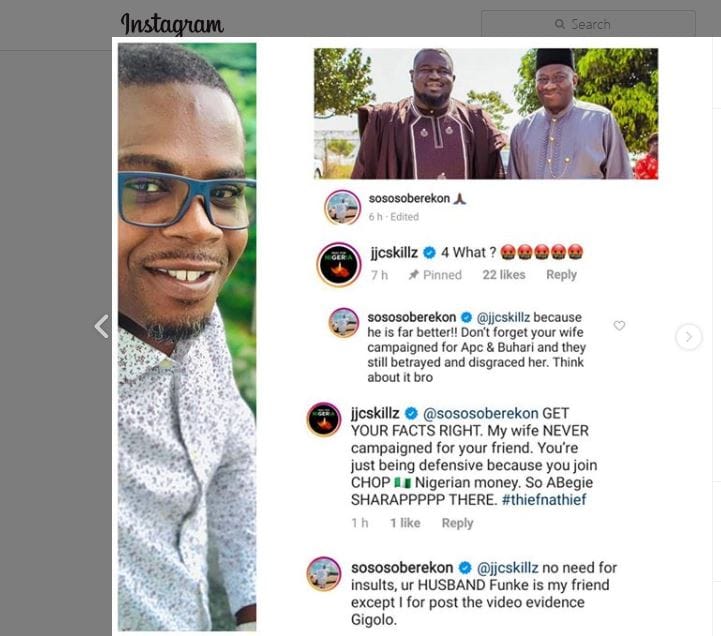 Well, many people thought that JJC would be cowed by Soso’s response to him seeing as it was a very low blow but the singer did not let that deter him.

In his response to Soso, he said that his masculinity was not in question and that he should not divert the issue at hand because he was promoting and elevating a person who looted the nation.

He said that Soso got paid and probably wanted a position. He went ahead to say that he is a king who found a queen and that they built an empire together with clean money. He asked Soso if he could say the same about himself.

See a screenshot of the exchange below: 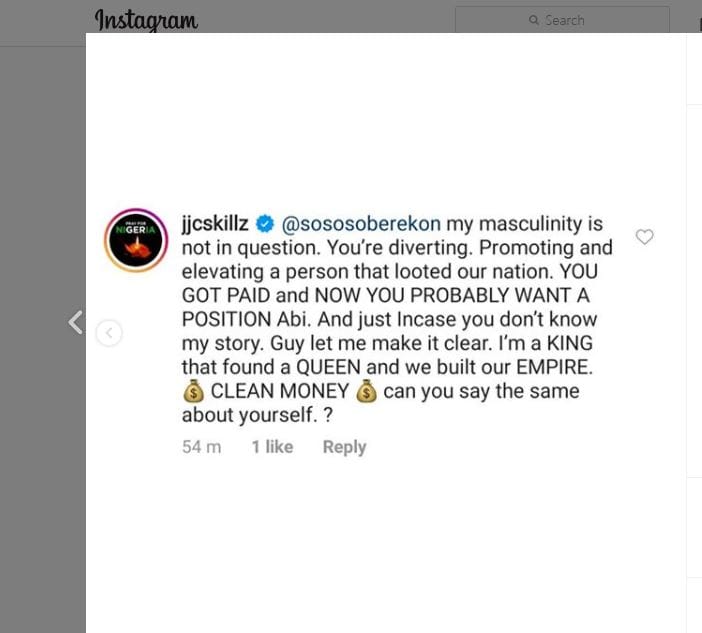