Home Celebrity/Entertainment Once A Shoe-Maker, Later A Movie Star: The Rise To Stardom Of... 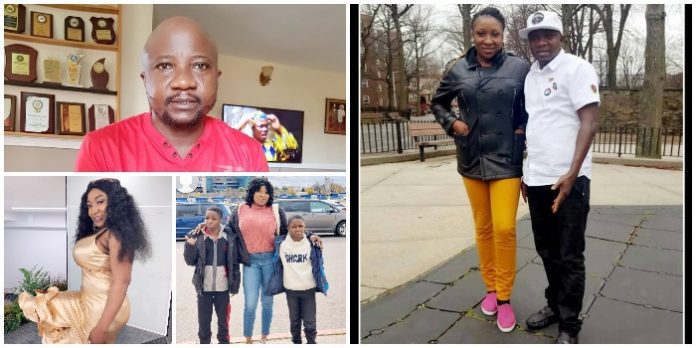 If you are a lover of Yoruba Nollywood movies, the name ‘Sanyeri’ will not be strange to you. Olaniyi Afonja popularly known as Sanyeri is a Yoruba comic actor and movie producer. Seeing Sanyeri in movies is a great delight for movie watchers.

Many people may not know that this talented comic actor passed through a rough path to attain this great height in his life. In this piece, we will be looking at the rise to stardom of Sanyeri, his lifestyle and lovely family.

Olaniyi Afonja Sanyeri was born on October 14, 1979 in Oyo state which is also his state of origin.

Contrary to some speculations that this funny movie star is not educated, which might be insinuations from most of his movie roles as an illiterate, Sanyeri is a secondary school certificate holder.

After being a popular actor, Sanyeri disclosed his aspiration to further his studies. He sees Education as an added advantage which will boost his career as his brand will grow bigger and wider. He said he has a private tutor who teaches him how to speak English language.

Talking about his level of education being an hindrance in his career, he said it restricts him to some extent as he cannot take up major English-speaking roles. Though he has featured in several movies where he used either the mixture of Yoruba and English, or Pidgin.

Sanyeri said he would like to attend University of Ibadan because it is domicile in his state of origin and his course of study is still undecided though he might study Theatre Arts.

Olaniyi Afonja Sanyeri started his acting career after his secondary education. In 1992, he started featuring in stage plays in his village.

Having observed that his acting pursuit did not yield him any income, Sanyeri decided to learn shoe making in order to fend for himself. He later relocated to Lagos in 1996 for greener pastures with his Nollywood friend, Adekola Tijani popularly known as ‘Kamilu Kompo’.

At the onset of his acting career in Lagos, Sanyeri was still unable to earn from it. He ventured into mobile shoemaking for a while with his acting.

Sanyeri was a mobile cobbler within the Idumota axis of Lagos state. He would hit his wooden shoemaking box with materials advertising his services around the area just to survive.

It was later that Sanyeri met his breakthrough in acting which is attributed to his exceptional talent, passion for his profession and comic roles in movies.

Sanyeri has acted in almost 100 Nollywood movies since he started his acting career in 1992. He has also produced several movies which include ‘Okan Eni’, ‘Opa Kan’, ‘Asiwaju’, ‘Okala l’America’, ‘Saworo’, ‘Adaba’, ‘Atiba’, etc.

Sanyeri hit his first jackpot in brand ambassadorship in 2009 as he was contracted for a commercial advert for Globacom.

His Tribal Marks And Stature

Talking about the tribal marks of Sanyeri, according to him, he has encountered several mockeries of his tribal marks both in movies and real life.

During his shoe-making job, he has to cover his face with handkerchief to hide his tribal marks from Igbo boys in Idumota who believed then that it was only Ghanaian cobblers who can repair shoes perfectly.

Also, Sanyeri was ridiculed by one of his actor friends at movie shooting who advised him to join the editor’s crew so as to edit his face and stature as people won’t like to watch him in movies.

“I started appreciating my tribal marks when I became an actor. I know that due to my tribal marks, I may not be able to take up some roles, especially lover boy and romantic roles, much less compete with other good-looking actors in the industry. But you know God works in mysterious ways. My tribal marks have brought many comic roles my way and that has automatically given me an edge as an actor. And that is why you won’t see me acting romantic roles. Even though as a child, people used to make a jest of me and I used to feel bad especially as I’m the only one with tribal marks among my siblings, I was never angry with my parents for giving me these tribal marks. Right now, no one can mock me again because I’m now more comfortable with them and I have made a fortune with them.”

This comment disturbed Sanyeri a bit but he overcame it because of his passion for acting.

Sanyeri met his wife, Hawawu in 2004 at National Theatre as she went to watch Sanyeri’s first produced movie, ‘Okan Eni’. After persistent disturbance, they began their love life and eventually got married in 2007.

Sanyeri’s wife married him when he was not yet prominent in the movie industry.

The marriage is blessed with two children i.e. 2 boys. They are identified as Olasunkanmi and Boluwatife Afonja.

Sanyeri’s wife and children are based in Canada. When asked the reason for such action, Sanyeri said he has always wanted the best for his children and he would not allow them to suffer like him. And perhaps he has been moving from one movie location or other, which brought about the decision.

Sanyeri is an hilarious movie personality who has created a niche for himself in the Yoruba entertainment industry despite his rough beginning and challenges.

He is a funny character in Yoruba movies such that there is no dull moment in movies he has featured in. Despite his educational level, he stood tall among his contemporaries. A great feat he attained based on his commitment and passion for acting. 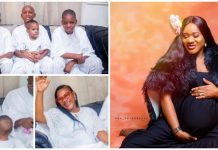 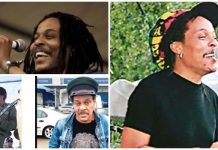 10 Things most people do not Know About Majek Fashek 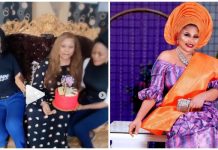 Muyiwa Ademola, Odunlade Adekola, Faithia Balogun, Iyabo Ojo Celebrate Joke Jigan on her Birthday – See the surprise she got on her birthday (VIDEO) 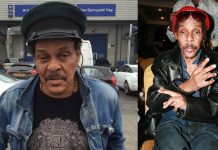 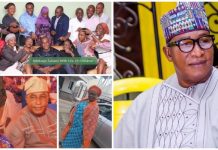 “All I wanted was just me and my wife, Ejide but…” – Adebayo Salami “Oga Bello” opens up on why he has more than... 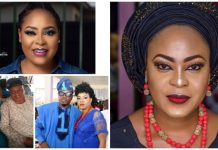 Sola Kosoko reveals how she relates with her Dad, Jide kosoko when they are on set together and her Husband reactions