MaDailyGistGet the Latest Gist in Town
More
GOSSIPGet Daily Gist
More
Home Celebrity/Entertainment “Her rival gave birth she no wish am kankan. You are now... 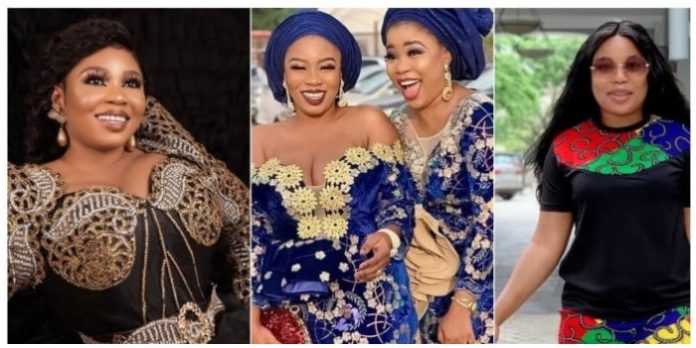 Actress and mum of one, Wumi Toriola has mocked her colleague and former best friend, Seyi Edun for not having a child.

It was reported that Wumi Toriola whose son turned one a few weeks ago, called out Seyi Edun for not celebrating him but having the guts to send him money from Ajo (piggy bank), especially as ex-rival Toyin Abraham deemed it fit to celebrate him. 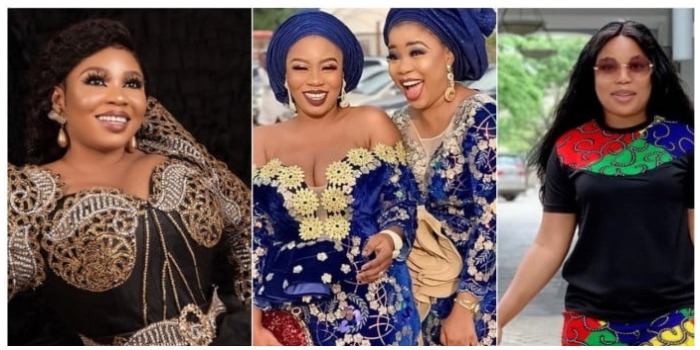 She wrote on Instagram “Never extend your beef with someone, to their kids. I am from this school of thought but my exceptions to this rule is KIDS….Those who read well know that “To every rule,there are exceptions,if you see anyone who extend hate to Kids,they are Murderers,Run from them,if they have the chance,they will poison you and kill you..i said what i said and when you see them in agony of what they caused them selves,DO NOT PITY them ..i said what i said ..call the police. Goodmorning”

And then when a commenter responded saying “I personally will pray for the child in my house and keep it pushing, if I see the child personally, I will greet the child but no need for forced relationship!”

Wumi replied saying “dem see child dem nor greet,dem dey send ajo dem nor message ,me sef nor d friends again but i fear say dem fit poison me,its a life matter#endbadblood….thank God u said god bless cos na only God fit bless ?…the person wet get this sub. Nah so she dey do. I could remember wen her rival gave birth she no wish am kankan. You are now wondering yy she is facing the problem she is facing now. Nah oshonu she be” 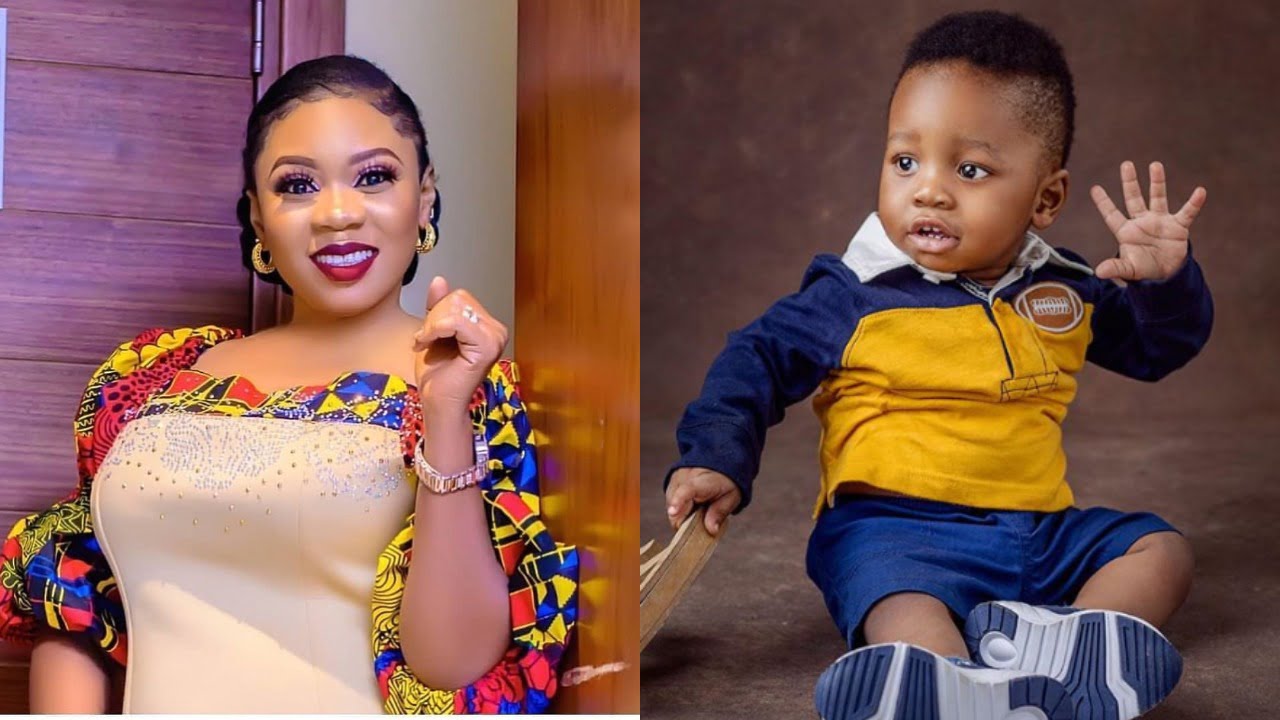 And when another follower cautioned her saying “why are you sounding like God and the maker of children, Seyi Edun might have wrong you badly but regardless when it comes to people looking unto God for a child, you just have to ignore them and leave them to God to judge…you are shamig Seyi because of her infertility, are you God? Wunmi this is too much from you, if she has chosen not to celebrate your son, leave her, it is her business….God is the provider of children..”

Wumi went berserk and said “Madam shaming stop looking for pity, we left that zone long ago, i was infertile for 8months, went through proceudres, ask Seyi who told her about infertility doctor, please stop that pity game, I did IUI 2 times, it didn’t still take the pssionate part of me, why extend a fight to kids, yes we have fallen out, but same kid you were rejoicing over his birth, you sent ajo on my son’s birthday, yet you refuse a birthday message as test just because you ar e pitted, madam stop glorifying infertility, we have ll been there, don’t lt waiting take your passion and compassion” 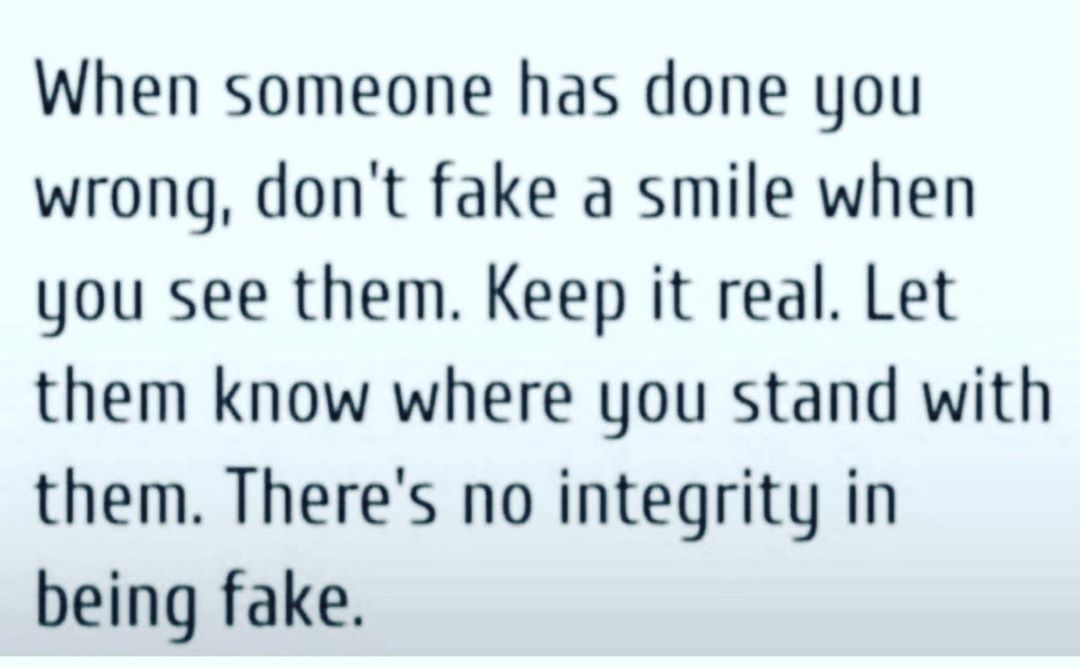 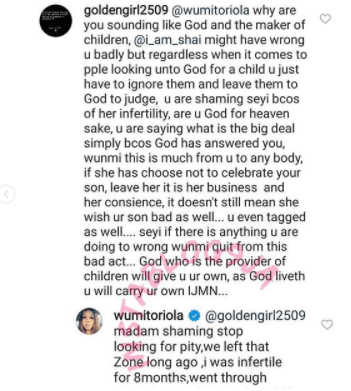 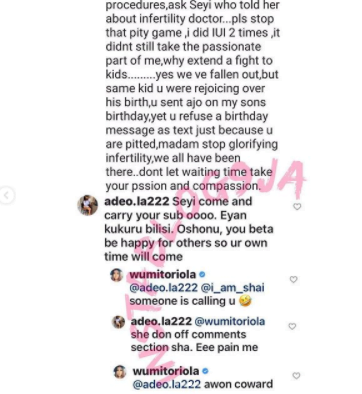 Recalls that Seyi Edun was advised by a fan to divorce Adeniyi Johnson weeks ago, after not being able to bear a child since they got together.

The troll cited Niyi Johnson’s ex wife, Toyin Abraham as an example, stating that she did not have her own child until she left Niyi.