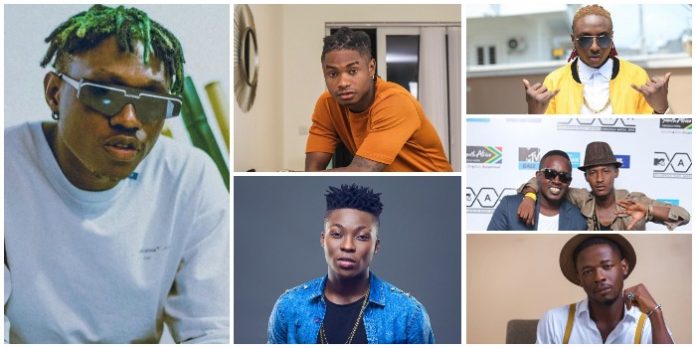 We guess this might surprise you, that some of your favourite secular entertainers come from a strictly religious home.

Conventionally, pastors’ children are supposed to walk on the path of righteousness created by their fathers- as it were. But these guys here defied all odds to carve their own identities. Fortunately for them, their fathers are still cool with them.

Let’s see which celebs we are talking about.

Nigerian singer, Lil Kesh, popular for street songs like Shoki and O Por has a father who is a pastor. In an interview with BluePrint Nigeria he was asked about what his father thinks about his music. This is an excerpt from that interview:

What was your dad’s reaction to your decision to become an artiste?

My dad was cool with it. He lets you do whatever you want to do. He feels that whatever his life story is doesn’t have to affect the way his children live their lives. According to what he used to tell me, everybody must live his or her individual stories. He watched me grow from being part of the choir, learning to play drums, and attending music shows. Till now, he gives me all the necessary support and respects my decisions.

Considering that your dad is a pastor, isn’t he bothered by your vulgar lyrics?

Those vulgar songs are basically about me doing my job and he doesn’t interfere. Besides, not all my songs are vulgar. I have recorded songs like Ishe, Semilore and others. However, the ones that go viral are the ones with vulgar lyrics. I understand my markets, and I know the demography I’m directing my music to, which is the youth and adults. I’m a blunt entertainer, but I consider my fans, and always try to give them what they want. But this year, I decided that I’ll feed my fans with more meaningful songs that will inspire them.

Another very popular artiste whose father is a pastor is none other than Zlatan Ibile. The singer revealed that his father Mr. Omoniyi is a pastor in the Redeemed Christian Church of God. Watch video below

Akpako master and Nigerian crazy boy, Terry G surprised Nigerians everywhere when he revealed that he is actually the son of a pastor. He revealed that not only is his father a pastor but also, his mother is a chorister with the Redeemed Christian Church of God.

Nigerian singer, Johnny Drille’s parents are also pastors. He revealed that both of his parents initially wanted him to do gospel music. He said:

Both my parents are pastors and at the onset it was hard for them to accept that I wanted to make love songs and not very religious ones as was expected. I personally found it a difficult decision to make as I was very concerned about what people would think of me as a pastor’s kid.

I was music director at my dad’s church for about 6 years following my move to Lagos and I’m sure that some members even though they wouldn’t say didn’t approve of my ‘sinful behavior’.

I loved being in the presence of God and the brethren but I was convicted I had a slightly different calling.

I had many arguments with my parents every time they heard me making music in my room and I could totally understand why (imagine my dad preparing Tuesday’s sermon and I’m there screaming at the top of my voice, ‘oh my beautiful love…’ ?). Overtime my parents understood me better and what I was about and began to support me more and more. My dad had contributed most of what he had when I initially wanted to shoot ‘Wait For Me’. I think they are perhaps my biggest fans right now and are very proud of me . I know they still pray for me every time not to lose sight of the original call of God

Nigerian heavyweight rappers, brothers M.I Abaga and Jesse Jagz are both sons of a pastor. They revealed that their father, Mr. Chris Abaga is a pastor while their mother, Mrs. Lydia Abaga is a gospel artiste.

The last one on our list is Reekado Banks. The MAVIN superstar responsible for hit songs like Chop Am and Standard revealed that his father is a pastor. It was his father that built a recording studio at home where he, his father, would write and sing gospel songs. It was in that studio than in 2008, Reekado recorded his first set of songs and has since gone on to become the musical star we know today.