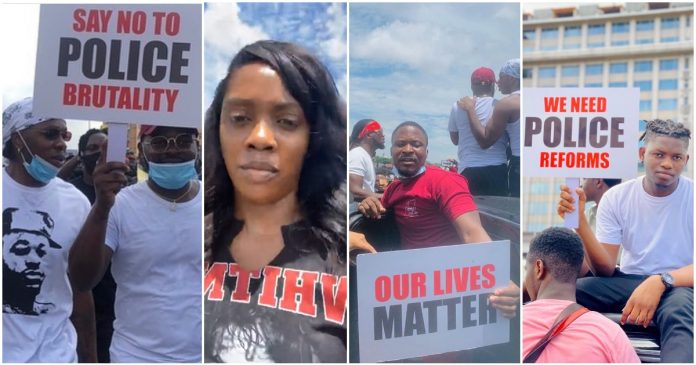 Whether as a celebrity or a regular citizen, there is no doubt that a lot of Nigerian residents have suffered mistreatments at the hands of Special Anti-Robbery Squad (SARS) operatives and this was the reason for a recent EndSARS protest in Lagos led by musicians Runtown and Falz.

Recall that a previous protest should have initially held on Tuesday, October 6, but rapper Naira Marley who was to lead the procession made a last-minute cancellation and opted for an interview with police spokesperson, DCP Frank Mba. 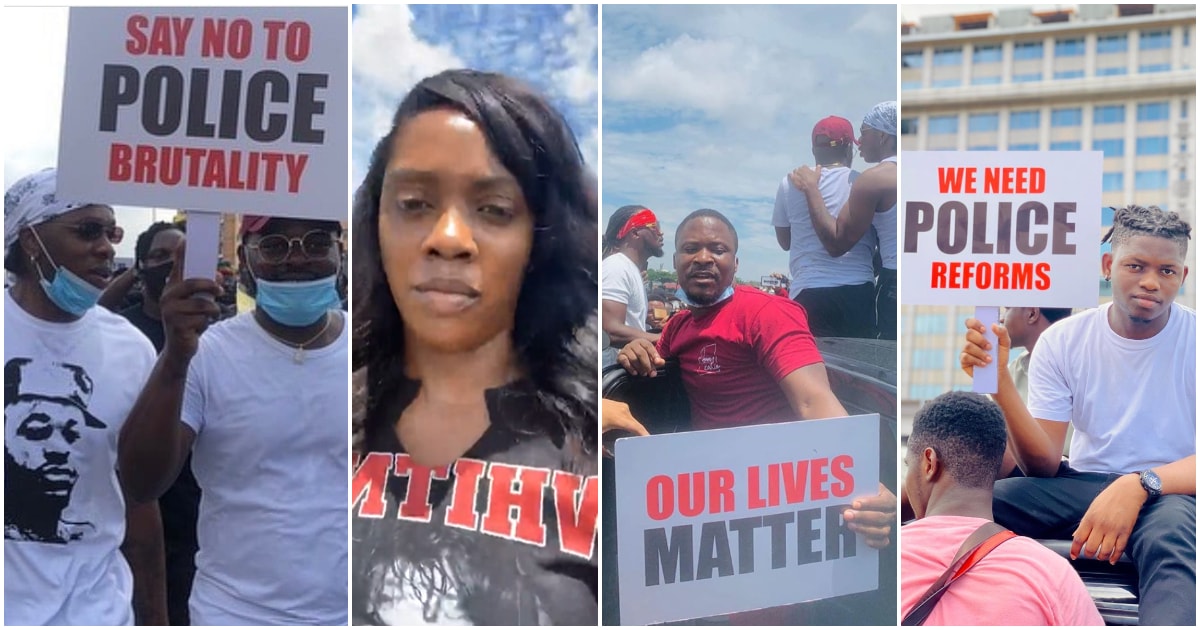 Following the disappointing cancellation, aggrieved youths who had been eager to hit the streets came out in their numbers to support Falz and Runtown on Thursday, October 8.

The youths were seen with different placards with wordings about the injustice being meted out on citizens by those who should be protecting them.

Interestingly, some other celebrities who have been agitating for the end of the special police unit on social media also took time out to join the protest on the streets of Lagos.

We compiled a list of celebrities who joined Falz and Runtown on the protest. Female celebrities like Tiwa Savage, Toke Makinwa among others were all present.

Check out photos and videos below:

We had Tiwa Savage joining Runtown and Falz on the #EndSARSProtest incoming now is Rude Boy @rudeboypsquare joining the protest!

God bless all these celebrities for giving their Voices!!! pic.twitter.com/ya1lcOmEWd

NOT EVERY TIME TALK!!! #ENDSARS

We are in this together #EndSarsNow ?

Peaceful protest for the good of all Nigerians!

As someone who has almost been shot by this same men, I know how traumatized I was, but Enough is Enough. It’s time for us to #endsars police brutality and this time for real. 10am is the time, Lekki phase one toll gate is the take off point . We must be Heard ..✊?

A post shared by Prince Nelson Enwerem (@princenelsonenwerem) on Oct 7, 2020 at 7:40am PDT

Those who could not be physically present also showed their support by tweeting on social media.

Join us on Tuesday, if you missed today, let’s go beyond social media, together our voices will be louder, the government has no choice but to listen, Nigeria belongs to us, we are tired, our tired is tired. #EndSarsBrutality #EndSars

Today we ended the audio protests and began the physical protests! We are protesting peacefully to put an end to #Sars We don’t need them! We don’t want them! We are tired!!! #EndSars #EndPoliceBrutality #EndSarsNow Shirt @tomikeadeoyefoundation

We all have to speak up and lend our voice to injustice. #EndSARs #EndPoliceBrutality … Shout out to @runtown for putting this together. Bigs @thisiswurld @falzthebahdguy @jaywonjuwonlo @tiwasavage @tokemakinwa & everyone one else who came out.

Our voices must be heard ?? #EndSARS #LagosProtestsAgain

Rapper Olamide who is out of the country said:

“Tiwa Run Toke Falz jaywon jamopyper and so many others… I even see my manager Flexed biceps shiii everybody don fall out on d #EndSARS matter. So sad I’m not in NIG atm to show my support but I’m with d people of Nig in spirit. Everyone who’s out there protesting I salute your bravery.”