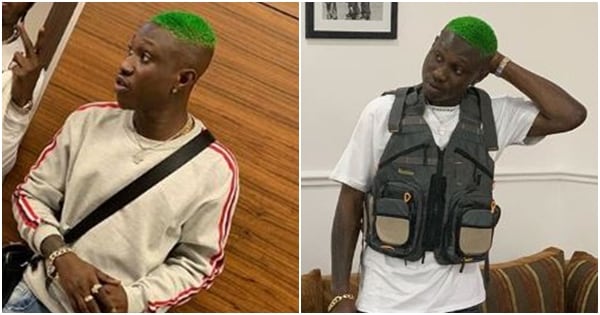 Nigerian singer, Zlatan Ibile has dropped a hot new single about his time spent in EFCC custody and his fans are going crazy with excitement.

Talk about turning the lemon life throws at one into lemonade, this is exactly what Nigerian artiste, Zlatan Ibile has done.

The singer recently released a new single titled 4 days in Ekotieeboh. The song which comes shortly after his release, is about his ordeal in EFCC custody.

He released a teaser of the song on his Instagram page in which he is heard rapping in Yoruba, something the green-hair artiste is known for.

While fans are celebrating his release, others are still protesting for the release of yet another singer and yahoo advocate, Naira Marley, who remains locked up due to overwhelming evidence found on him, according to the EFCC.

On Friday, May 10, rapper Marley had been arrested by the commission over internet fraud allegations. It was later reported that the rapper had been found with incriminating laptop device that proves he is involved in internet fraud.

The commission stated that the 11 charges is bordering on fraud for alleged credit card fraud. In a statement, it was revealed that the credit cards bore the names Nicole Louise Malyon. and Timea Fedorne Tatar.