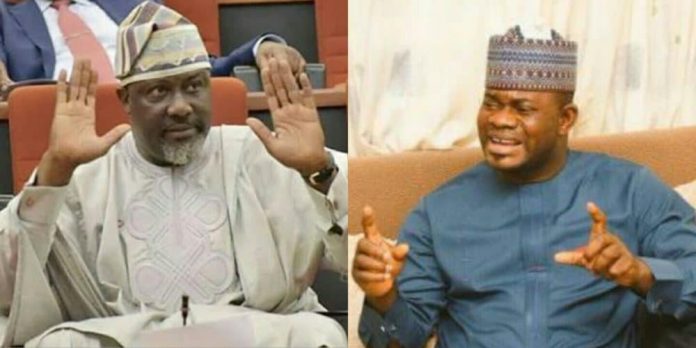 Kogi state governor, Alhaji Yahaya Bello, has commiserated with the senator representing Kogi west senatorial district, Dino Melaye, over the death of his mother, Deaconess Comfort Melaye whose death was announced on Thursday, May 2.

In a condolence message to the senator, Governor Bello described the news of Deaconess Melaye’s death as “a rude shock and great loss not only to Kogi state but Nigeria in general, given her invaluable contributions to the cause of humanity.”

The condolence message which was signed by the governor was made available to Legit by his chief press secretary, Onogwu Muhammed.

He described the departed Deaconess Melaye as “a quintessential mother, devout Christian and community leader who devoted her lifetime to the service of God and humanity.’’

“I received with shock, news of the passing of your mother, Deaconess Comfort Melaye. Words are insufficient to condole one on a mother’s death, but I do urge you to take solace in the life that she lived. I have no doubt that mama’s impact and reach will continue to be felt through her offspring.

“On behalf of the great people of Kogi state, my family and myself, I offer you our deep condolences while praying the Almighty God to grant you and the rest of the Melaye family the grace to endure this irreparable loss,’’ the governor wrote.

He sent his heartfelt prayers to Senator Melaye and his household as he asked for God to grant his late mother eternal rest.