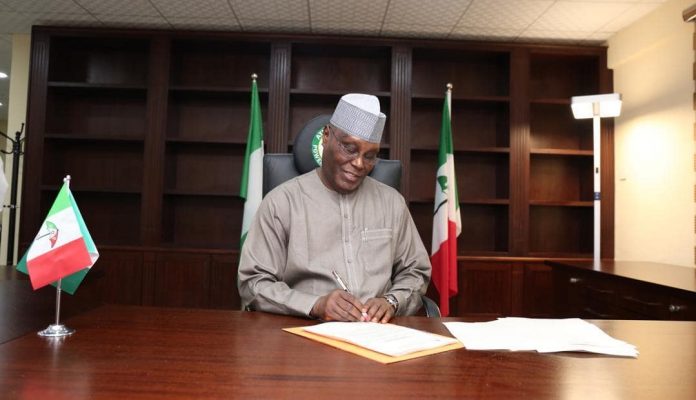 A former governorship aspirant on the platform of the Peoples Democratic Party (PDP) in Anambra state during last election, Zeribe Ezeanunna, has also reacted to the claim by the All Progressive Congress (APC) that Alhaji Atiku Abubakar, the PDP presidential candidate, was not a Nigerian but a Cameroonian.

Ezeanunna, according to Daily Independent, slammed that ruling party, saying the claim is “evil, idiotic, diversionary and a deliberate ploy by APC to divert attention that they did not win last presidential election in the country.”

The PDP chieftain, however, boasted that the APC’s ploy will fail, adding that Atiku would eventually be declared winner of the 2019 presidential election.

Ezeanunna also reported said that Atiku is a full fledged Nigerian, born in Nigeria and that “any attempt to distort history was evil and should be condemned”.

He reiterated that Atiku was born a Nigerian and that APC leadership was aware of it and was trying to divert attention because it knew that Atiku won the election clearly.

Reacting to the alleged plan by the APC leadership to exclude the southeast from occupying key leadership positions in the ninth National Assembly, Ezeanunna said that the development had confirmed Igbo people’s belief that the party did not want them.

He appealed to Igbo people in the APC to learn their lesson in time and have a rethink and start looking for other parties where they would be accommodated.

The PDP chieftain also said that the belief that APC would give Igbo the presidency position in 2023 was a mere joke.

Meanwhile, We previously reported that Atiku had also reacted to the claim by the APC that he is not a Nigerian citizen.

The APC had filed a motion at the Presidential Election Petition Tribunal in Abuja saying Atiku has no right to challenge the result of the 2019 presidential election as he was not a Nigerian.

The APC said Atiku’s case lacked merit as he was a Cameroonian and therefore has no right to stand for election.

However, reacting to the claim, Atiku, who spoke through his media aide, Paul Ibe, said that it is an insult to Nigerians and the office of Vice President, which he (Atiku) occupied for eight years, for the APC to allege that he is not a Nigerian.