MaDailyGistGet the Latest Gist in Town
More
GOSSIPGet Daily Gist
More
Home Politics “What I do when I am on set with my sons” –... 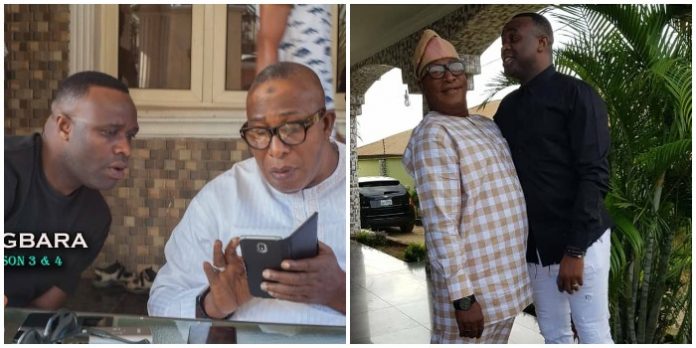 Respected actor and movie producer, Adebayo Salami, fondly known as Oga Bello, has told Saturday Beats that he and his sons, also in the business of make-believe, relate more as colleagues than as family members.

Please be a honest judge, who is more handsome between @femiadebayosalami and i? We are set for the day's shoot…all for #AlagbaraTheSeries Season 3 and 4.

The 66- year-old Kwara State-born former president of the Association of Nigerian Theatre Arts Practitioners, who is currently working on the third season of his new series currently airing on national and pay-television stations, said that even when at home, the professional relationship and understanding between him and his sons manifested more than their father to children rapport.

He said, “When I am on set with my sons, I see them more as colleagues. I see them as the professionals that they are.

“That relationship has grown to the extent that even when we are at home, despite the fact that they are my children, we relate like colleagues.”

Never give up, no matter how life presents itself to you. All will be well, it's a matter of time. Work. Pray. Believe. Photo: @AriyikePhotografy

Asked if he thought age had slowed him down and reduced the number of movies he featured in these days, the soft-spoken thespian said that his reduced involvement in film productions was as a result of other factors and not his age.

May you be blessed so much that, it will give you unbeatable joy. #Amen #Prayer #OgaBello

He added, “Age cannot slow me down. If people don’t see me in movies as much as they used to in the past, it could be because I don’t like the scripts.

“I get a lot of invitations to be part of different movie productions but I am careful about the ones I appear in.

“I have been on location for several weeks now for a series we have been shooting.

“In terms of improving the quality of scripts and storyline of movies, we are trying our best through our association.

“As a leader, I talk to my colleagues, especially the younger ones, to come up with scripts that would carry good messages and address important issues in society and I am happy that a lot of dialogue is going on in that regard.

Eid Mubarak to us all. May Allah accept our deeds as acts of ibaadah. May He give us the grace to witness more Ramadan in life. Cheers. Outfit: @kpearl_fabrics_n_more . Photo: @topsy_photography for @AriyikePhotografy

“As for my involvement in movies, age cannot slow me down, at least not now.”