31-year-old fraudster, Dare Oladimeji pictured above, has narrated how he can hack into a phone and transfer money from any account linked to the sim in the phone, even if the phone is locked by its owner. 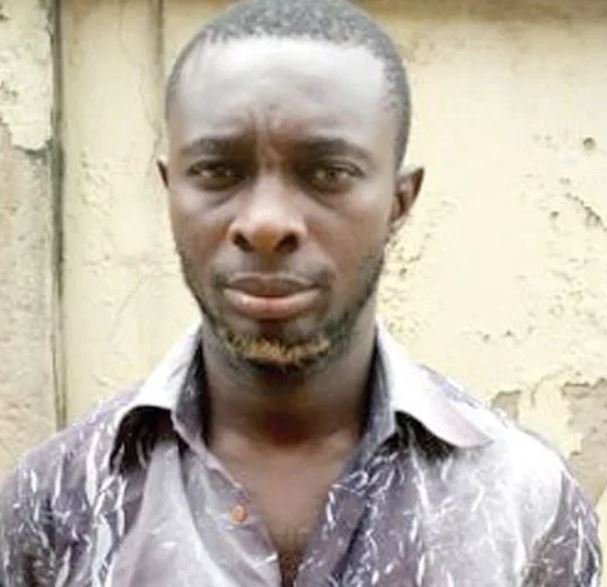 Oladimeji, a footballer who in 2016 returned to Nigeria from Dubai where he played football for ALAIN FC, was recently apprehended by operatives of the Special Anti-Robbery Squad, Ladipo, Lagos after he withdrew N200, 000 from one of his victim’s account in the Idi-Oro area of Lagos.

He told newsmen while being paraded that hacking into bank accounts through phones had nothing to do with being a graduate as he learnt how to commit the crime via Google Chrome.

“I work on sim cards to get money. When I lay my hands on any sim card, I would slot it into any small phone that is not android. When that is done, I would press a code which brings out the list of banks the owner of the sim uses. For example, if the person is using GTB, I will proceed with the normal code of *37*100#. If the person has money , we would use it to buy recharge card to confirm how much the owner has, through the debit alert that would pop in to reveal the balance. Thereafter, we would transfer the money into donors accounts, from where we would withdraw the money.

Locking of phones with password does not stop me from hacking into any account, as long as I can lay my hands on the sim card. All I need to do is to remove the sim and slot it into a small phone. The only thing that can prevent me from hacking into account through phone is when the SIM card itself is locked. But most people don’t lock their sim cards, they only lock their phones. You can only beat my likes to the game if you lock your sim card because only the owner knows the password”.

According to the father of three, he ventured into crime after he lost all the money he brought from Dubai.

“When I came back from Dubai in 2016, I brought N7 million , out of which I gave one Mr Shola N5 million for a genuine business with NUPENG. Unfortunately, the man died . I decided to venture into this business which is a small version of yahoo yahoo because I didn’t want to go into robbery. At Idi-Oro, there are pick pockets . When they snatch phones from victims, they would throw the sim cards away. What I do is to go looking for these sim cards and continue from there. Nobody taught me the skill. I learnt it from google chrome. This is just common sense. But I regret my action because I have brought shame to my children” he said