Big Brother Naija’s housemate, Tacha, who is popular on Instagram for her explicit dance moves and raunchy pictures, has come under fire and is being dragged on social media, following her failure to spell the word ‘Daughter’ correctly. Even though the 23-year-old graduate of Ignatius Ajuru University of Education, and self-acclaimed Port Harcourt first daughter who is on possible eviction this Sunday has been getting quite a number of support from media personalities on Instagram, she got some serious backlash from social media users when she supposedly spelt ‘daugter’ instead of ‘daughter’ on her paperwork.

She, however, has been heavily criticized for her spelling error on social media by fans of the show as a lot of people consider her to be daft and unworthy of winning the N60 million worth of prizes. Here are some comments gathered:

“I think Tacha hides her inability to have constructive interaction with enlightened people behind her snub annoying disposition.”

Just when I thought I've seen it all. Give it up for Tacha #BBNaija pic.twitter.com/cgI7xwTztC

“President of the Pepper dem gang. Her Royal Majesty PH First Daughter Tormentor the Daughters of Anger. The nemesis of Acrimony Twitter. The endless envy of the bodyshamers Forum. Slayer of the Bitterleaf Crew. Queen Tacha.”

“My pain is Tacha doesn’t know shit and she acts like my mum’s sis that feels like they know everything. That gal doesn’t even know how to spell the city she is from.”

“Until you’re on Live TV and can do everything perfectly without mistake, don’t judge anyone on TV! E no easy!!!”

“Tacha Na olodo that’s why she can’t even spell daughter or interact without fighting! BBN no be hookup online hustle.”

Your favourite girl at it again #Tacha #BBNaija pic.twitter.com/DloRJsaJoE

“She even mixes LOWER CASE AND HIGHER CASE together. She seems the type to tell her kids in the future that she was the most intelligent in her class… lol.”

“This made me doubt my spelling skills too. In fact I am not attempting spelling anything soon until my head clears.” 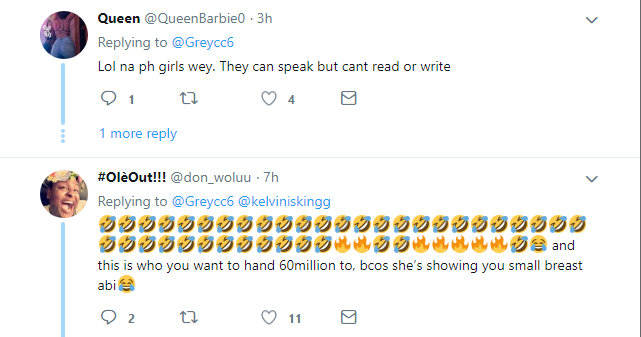