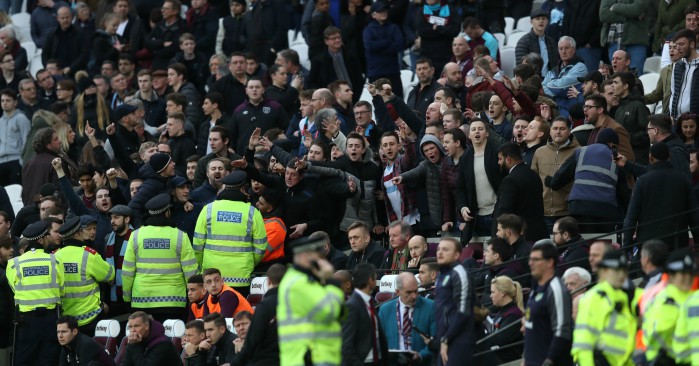 West Ham face the prospect of playing behind closed doors at the London Stadium if there is any repeat of last weekend’s crowd trouble against Burnley.

The Hammers’ next home game with Southampton will have a “significantly larger police presence”, but there will not be a partial or total closure of the London Stadium. Yet.

The club have been warned a repeat of such scenes could lead to them playing contests with a reduced capacity in the future.

A series of pitch invasions marred Saturday’s 3-0 loss to Burnley, while joint-owner David Sullivan was struck on his glasses by a coin after hundreds of angry supporters gathered in front of the directors’ box.

An emergency meeting of the Safety Advisory Group (SAG) at London Stadium was held by the club, emergency services and local authorities on Thursday night, where plans were put in place to prevent a repeat of ugly incidents at future home games.

West Ham entertain Southampton on March 31 and a series of measures will be implemented for that contest, including more stewards, greater security around the pitch and an increased police presence.

The club have already vowed to issue life bans to those who invaded the pitch and threw missiles, and the SAG insisted that it is satisfied a stadium ban does not need to be imposed yet.

However, it also stated future fixtures will be monitored and a repeat of such incidents could force a rethink on that front.

A spokesperson for the SAG said: “The SAG acts as the advisory body to Newham Council in its safety certifying role. Following reassurances that have been given, it is the SAG’s view that the council does not need to use the ultimate sanction, which would see capacity reduced at the venue and spectators excluded. The remaining homes games will be closely monitored.

“The SAG must make clear that, in the event of future disorder, it would seriously consider advising the certifying authority to take forward this sanction. Playing behind closed doors would be a great shame for the majority of fans who wish to watch and support their team in safety.”

The SAG called the trouble at the Burnley match “unprecedented” and admitted the security team in place were stretched by the sheer number of problems they were forced to tackle.

Its’ statement said: “The London Stadium Safety Advisory Group met today and found that a small minority of spectators from within a very large crowd caused an unprecedented level of disorder at multiple locations across the stadium, which would have been almost impossible for any security team to manage.

“Whilst some issues in the security regime were identified, it is recognised that the operation were stretched significantly by the scale and volume of incidents and stopped most attempted pitch incursions successfully.

“In response, a series of measures will be introduced for the next fixture including: increased stewarding, enhanced pitch security and a significantly larger police presence.”

West Ham said they “welcomed” the announcement that new measures would be enforced for their meeting with the Saints.