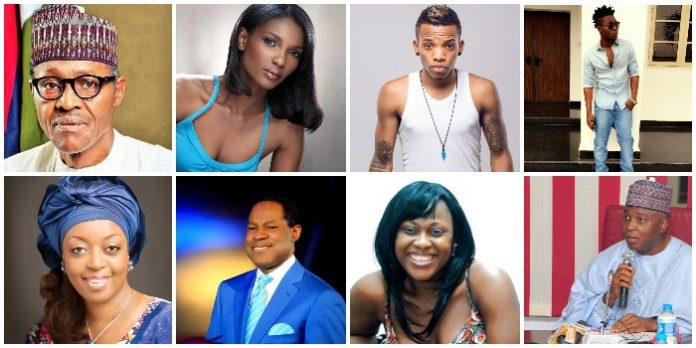 It is believed that those women and men whose birthdays are in December are generous friends, ambitious humans with an impressive sense of humour. Let us look at the most famous Nigerian celebrities and prominent people born in December. We are sure you’ll love to say ‘happy birthday’ to many of them.

Those singers, rappers, politicians, sportsmen, and other prominent men and women who were born in December in Nigeria should be influenced by either Sagittarius or Capricorn zodiac signs. How do these two signs describe the ‘born in December personality’ in these people?

The personality of people who are born in December is usually optimistic, generous, and trustworthy. These people can easily charm you, they have a lot of friends and love adventures.

At least, this is what we want to believe, and we are sure that many Nigerian celebrities and prominent people born in December are cool, fun to be around and charming in their own way.

There are so many awesome artists in Nigeria that it is necessary to describe both singers and particular rappers born in December. Rap and hip-hop celebrities are among the top and highly demanded singers in 2018, and we are sure that this trend will continue in 2019.

One of the Mavin Records singers, artist Reekado Banks (his real name is Ayoleyi Hanniel Solomon) used to be known as Spicy. He won The Headies ‘Rookie of the Year’ title in 2014. He also became the winner of another The Headies award called Next Rated in 2015.

This singer also writes his own songs. His music career started 5 years ago, and these days he works with Difference Entertainment and has been associated with Tizzle Nation label. The artiste has already won several impressive awards including The Headies (2013), Nigerian Music Video Award (2014), and others.

Popular dancer and singer Tekno (his real name is Augustine Miles Kelechi) is often called Golden Boy of Africa for his talents. This year he is turning 26 years old. This celebrity loves hip-hop, R&B, and Afro-beats music genres. He is talented and has been awarded different prizes, including 2016 MTV Africa Music (for Best New Act) and 2015 9th Nigeria Music Video (for Best Pop Extra Video) awards.

This amazing actress and singer’s real name is Deborah Oluwaseyi Joshua, but all her fans really love the stage name which is Seyi Shay. If you have played Crime Life video game you should remember some soundtracks from it, well, 3 soundtracks were created by this lady who loves reggae and R&B styles the most.

This beautiful woman is an actress and singer who loves hip-hop, soul, and other music styles. Nneka’s songs are not only in English. She also loves to perform in Nigerian Pidgin and Igbo languages. Her career began in 2003, and since then she has got millions of fans all over the country who are sincerely fond of her multiple talents.

This woman is highly educated. She has reached impressive heights as a politician. She was the Minister of Transportation from 2007-2008, Minister of Mines & Steel, 2008 – 2010 and Minister of Petroleum Resources from 2010-2015.

This man has reached success in several different fields. He joined the political life, was a good soldier and became a businessperson. His career is very impressive, as back in 1975 he became the Chief of Nigerian Army and later he also served as Minister of Defence. Today he is the chairman of SAPETRO.

Everyone in our country knows this famous man who is currently the President of Nigeria. Muhammadu Buhari has been in office for the last 3.5 years, since 2015. He took part in several presidential general elections but didn’t win in 2003, 2007, and 2011. Still, he didn’t give in, and his new attempt in 2015 was finally successful.

This is another prominent politician on our list of birthday men. He is the current President of Nigeria’s Senate, and he took this amazing position in 2015. Nigerians who live in Kwara State also remember him as their Governor who worked in the office for many years, from 2003 until 2011.

This famous politician is currently one of the Senators in Nigeria. He was Governor of Benue State for 2 terms, from 1999 until 2007.

Here are some of the top Nigerian actors, actresses, and models whose birthdays are celebrated in December.

There are so many fun Nigerian films with Osita Iheme and Chinedu Ikedieze. Chinedu is a great actor who has been awarded one of the top titles of Lifetime Achievement Award that is honoured by African Movie Academy.

This gorgeous lady is a successful model from Rivers State. In 2001, she won the title of the Most Beautiful Girl in Nigeria and also won the Miss World pageant.

Have you seen the film Visa to Hell? It is starring a beautiful Nigerian actress Uche Jumbo Rodriguez who is also a movie producer. Even though this woman became successful as a movie actress and won Female Viewers Choice award at Golden Icons Academy in 2015, she studied programming and mathematics at two different universities. She is educated, good-looking, smart, and very talented.

Even though this man was born in the USA, he was raised in Anambra State in Nigeria. The man became a well-known model, actor, and also boxer. Some sources say that he is one of the top downloaded black male models on the Internet. His most known roles are in the movies True Story and Oxford Gardens (both were released in 2015).

It looks like the first month of winter has brought the most sportsmen to Nigeria. A lot of footballers, for example, celebrate their birthdays in December.

When active in his football career, Kanu was a famous and extremely popular defender in the field. Even though he has already retired from big sports, he is still remembered and respected for playing in more than 300 league matches and representing several clubs.

Being one of the top footballers in and outside Nigeria, Victor Moses is known and loved by millions of people and not only Nigerians. This winger plays for Chelsea. His first appearance in the English Premier League took place 8 years ago.

This soccer player has already retired, but he is remembered in the sports world. The man spent most of his football career as an international midfielder. He appeared in amazing 175 games representing Spain, and he scored more than 20 goals for this European country. He also played for Nigeria as a part of the national squad during Africa Cup of Nations and World Cups matches.

Long jump sportsmen are also impressive if they were born in December. For example, this amazing woman is a former athlete whose career was not just overwhelming but also brought the country a gold medal at the 1996 Summer Olympics.

Daniel used to play football professionally, being a good, quick, and powerful forward. He also used to help with the managing of the national soccer squad.

P.S. There are many more famous Nigerian footballers, sportsmen and athletes who have achieved a lot in their careers and celebrate their birthdays in December, but we can’t mention them all. More Sportsmen born in December below:

Other famous Nigerians born in December

Many people know this man as Pastor Chris. He is a famous Nigerian pastor who is the leader and founder of Christ Embassy located in Lagos. The successful man has built a network that organizes ministry sessions all over the world, including the UK, the USA, Canada, and many African countries.

This famous mathematician built an impressive career in Nigeria. He worked as Federal Minister in several offices from 1979 until 1982 and became the Senator in 1999 to 2007.

This man is one of the most famous in the country. Even the New York Times called him one of rickets and most prominent men in Nigeria. He introduced Islamic banking in the country and has become an important banker and businessman.

Besides being a professional lawyer, he has also former Governor of Akwa Ibom State from 2007 to 2015.

Chris Abani is a popular Nigerian writer. His novel, Masters of the Board was finished when Chris turned 16 years old. It was followed by Sirocco, several plays and other stories that led this author to prison. He had to move to the UK and eventually to the USA where he lives now.

As you can see, many prominent Nigerians and celebrities were born in December. We want to wish them all wonderful birthday celebrations. Happy Birthday to each one of them!