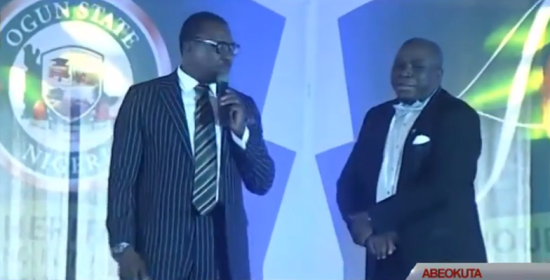 “You know before now, when I perform, especially when Mr. President Obasanjo, found out how much I got paid for the event, he was livid. When they now asked me to come and perform for the new president considering that he’s asking money from everybody, he said, how much do you want to charge? I said anything you want to give me sir, there’s no need to tell him the amount, he’ll add me to that Dasuki’s list. Olorunmaje! ..and you know that man has not finished confessing”he said

Gbenga Adeyinka who was co-anchoring the event with Alibaba, said everything Alibaba was saying was his personal opinion because before leaving his house, his wife warned him to mind what he said at the event because she doesn’t want a situation where “they” will come and search her house. He said Alibaba should continue with his joke at his own risk. Watch the video….