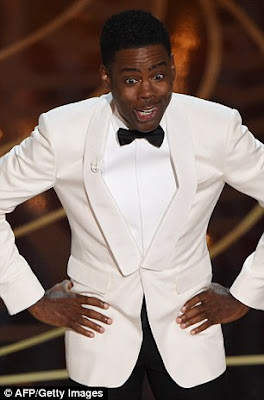 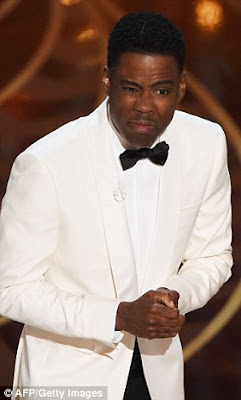 Jada Pinkett-Smith started the 2016 Oscars boycott after her husband Will Smith was snubbed. You would think the host, a black man, Chris Rock, would support his own people…lol…but last night he took a swipe and Jada and Will. He said; 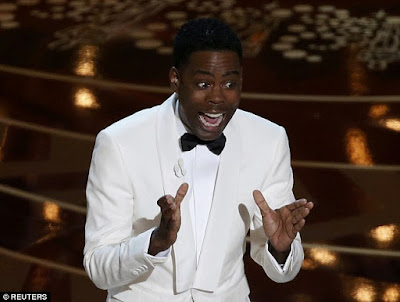 ‘What happened this year? Jada’s going to boycott the Oscars. Jada boycotting the Oscars is like me boycotting Rihanna’s panties. I wasn’t invited! ‘It’s not an invitation I would turn down.’

Other things he said below…

“You realize if they nominated hosts, I wouldn’t even get this job. You’d be watching Neil Patrick Harris right now,’

‘It’s the 88th Academy Awards, which means this whole no black nominees thing has happened at least 71 other times,’

Speaking on why the furor over diversity in the industry was an issue today rather than in the 1950s or 1960s, Chris Rock said black Americans had bigger issues to worry about then.

‘Because we had real things to protest at the time. We were too busy being raped and lynched to care about who won best cinematographer.’
‘When your grandmother is swinging from a tree, it’s really hard to care about best documentary foreign short.’

‘I was at a fundraiser for president Obama, a lot of you were there … It’s all of Hollywood and there were four black people there: me, Quincy Jones, Russell Simmons, Questlove. The usual suspects,’
‘At some point you get to take a picture with the president. As they’re setting up the picture you get a little moment with the president. I’m like, ‘Mr. President, you see all these writers producers and actors, they don’t hire black people – and they’re the nicest white people on Earth. They’re liberals!’

Later he talked about racism in Hollywood

‘Everyone wants to know in the world, is Hollywood racist? Is it ‘burning cross racist’? No. Is it ‘fetch me some lemonade racist’? No. It’s a different type of racist…. Hollywood is ‘sorority racist.’ It’s like, we like you Rhonda, but you’re not a Kappa.’