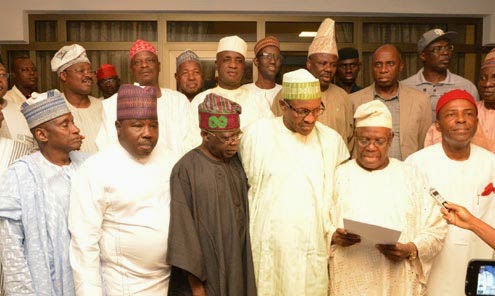 A meeting of top members of APC convened to resolve all disagreements bordering on the zoning of top offices in the incoming National Assembly ended in a deadlock on at the Rivers state Governors lodge Abuja on Wednesday April 22nd.

According to Vanguard, the meeting came to a deadlock after the leaders failed to reach a consensus on where to zone the office of the speaker of the House of Representatives. The members were divided between zoning it to the North-East and South-West. The leaders however agreed on the zoning of the office of Senate President to the North-Central and the Secretary to the Government of the Federation, SGF, to the South-East.

Sources say outgoing minority leader, Femi Gbajabiamila and Yakubu Dogara are being nominated for either speaker or deputy speaker of the House of Representatives. In attendance at the meeting were President-elect, Gen. Muhammadu Buhari (retd); Vice-President-elect, Prof. Yemi Osinbajo; party leader, Asiwaju Bola Tinubu; governors-elect, senators-elect as well as some top executive officers of the party.