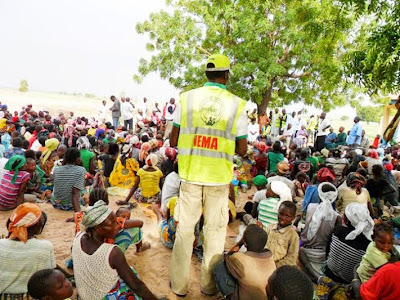 One of the rescued women from Sambisa forest, 36 year old Meriam has narrated how Boko Haram members prepared little girls for suicide bombing. In an interview with New York Times, Meriam said while she was being held hostage by the sect members, she saw how little girls were brainwashed into thinking that they will be forgiven after they carry out the bomb attacks

“The Boko Haram would recite the prayer for the dead. Then they would put on the hijab, covering the suicide belt. After they had prepared, “They said, ‘God will forgive us. Then, they would enter the vehicles, and they would send the women away.”she said. She also said during the interview that she had seen some of the Chibok girls captured in April last year at a hospital in Gwoza.

Many of the women who were rescued and interviewed recalled how they got pregnant by the sect members who turned them into sex slaves. Some of them had contracted the deadly HIV/AIDS virus from the sect members.

30 year old Yahauwa, who had just tested positive to HIV, was in tears as she shared her story
“Is it from the people who forced me to have affairs with them?” she asked a relief worker, tears streaming down her face.
Later, she explained that she and many other women had been “locked in one big room.” while they were held hostage.

“When they came, they would select the one they wanted to sleep with,” she said. “They said, ‘If you do not marry us, we will slaughter you.’.

Another rescued woman, 25 year old Hamsatu who is pregnant for one of the sect members said “They married me,”. She said she was forced to get married to one of the sect members while she was in their custody.
“They chose the ones they wanted to marry,” added Hamsatu, whose full name was not used to protect her identity. “If anybody shouts, they said they would shoot them.”.

Yana, one of the women who was interviewed said the sect members had “parked” her – a word many women have used to describe their imprisonment – with about 50 other women in a house in Bama, Borno State’s second city, with a population of several hundred thousand. Bama was occupied by Boko Haram last September.
Inside the house, “If they want to have an affair with a woman, they will just take her to a private place, so that the others won’t see,” said Yana in a singsong voice. She could not recall her age; a relief worker at the camp here said she had been raped so often by Boko Haram that she was “psychologically affected.”
Yana said the militants had forced her to have sex with them.
Her feet and stomach were swollen and the relief worker said she was likely pregnant, though her test results had not come back yet. Others workers here said many of the women had signs of physical and psychological trauma from being raped repeatedly.