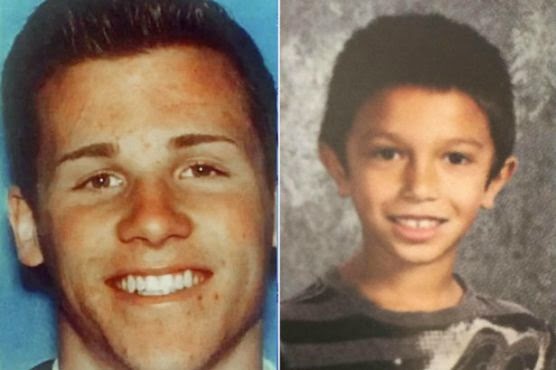 18 year old William Shultz, (left) stabbed 9 year old Jordon Almgren (right) while he slept just a day after being sent to hospital with mental health problemsAccording to a report by UK Mirror William confessed to stabbing his best friend’s little brother to death because ‘he wanted to see what it was like’, telling police later that he wanted to murder someone ‘before the end of the world’.

Shultz gave the extraordinary confession during an interview in jail, in which he calmly said: “I wanted to see what it was like to take a life before someone tried to take mine.”

Wearing a yellow, jail-issued jumpsuit with his hair cut short, Shultz said: “I wish that I hadn’t. I think about what if that was my little brother. In that sense, I do feel bad. I do have remorse for what I did. But there’s a reason for everything that happens.”

Shultz murdered Jordan early on Sunday morning after he visited the family home following an argument with his mum.

The killer told how his family had become concerned about his mental health and Shultz was briefly hospitalized just a day before the stabbing.

Police were sent to Shultz’s house and were asked by his family to evaluate his mental health on Saturday.

It was determined that he did not meet the criteria for a mental health sectioning – but the teen agreed to be taken by ambulance to the county hospital for evaluation and treatment.

Once he was discharged, Shultz visited his mum’s house before they had the fatal row.
In an interview with American news site Contra Costa Times, Shultz said tragic Jordon’s older brother had been his best friend since high school.
Shultz was arrested Sunday on suspicion of Jordon’s murder, and is being held on $1 million bail in the County Jail in Martinez.

When police arrived at the family home, Jordan has already been sent to hospital.
Shultz, who had spent the night at Jordon’s home, was identified as the suspect, and a police spokesman said he attacked the boy overnight for “unknown reasons.”
Detectives are currently trying to establish a motive, police spokesman Jimmy Lee said.
A nurse treating Shultz found slashing wounds on his wrist after he accidentally caught his arm on a glass window twice during the stabvbing.

A memorial for Jordon has now been set up near the family’s home in Discovery Bay, California.
Shultz, who said he has no criminal record, lived in Discovery Bay for about 10 years and said his past played a role in the stabbing.
“A lot goes into what led me to that moment,” he said.

About a month ago, Shultz said, he got in a fight with his parents and left home for Los Angeles.
“What’s the purpose of why I’m on this Earth? I need to find that,” he said, adding that he started noticing “coincidences or miracles”.
He said his relatives all expressed concerns over his mental state, and shared books with him that he said contained “mysterious messages”.
He said he became obsessed with the number three and those “coincidences” from books.
On Thursday, he said he bought survival gear and planned to find a way to South America to avoid an upcoming American civil war.
He bought a “Bear Grylls knife”, which he said was the stabbing weapon.
“I saw it as the world was sort of coming to an end,” he said, adding that he told this to his mum.
“She didn’t want to hear it. It concerned her about my mental state. She wanted me to see a psychiatrist.”

On Saturday Shultz said he was taken to the county hospital, where he spoke to a psychiatrist for two hours, sharing his books but telling the doctor he was not hearing voices.
“He didn’t even know how to take it,” he said.
“He decided to discharge me and sent me home in a taxi, and I later found out he called my mom and told her I was delusional.”

On his return home, Shultz said he fought with his mum and she kicked him out, sending him to his best friend’s house.
At the house that day, lots of kids were around playing video games and eating pizza, he said.
Eventually everyone went to sleep, but at 3am Shultz said he began to feel paranoid.
“I couldn’t sleep,” he said.
“I had all these thoughts going through my mind.”
He said he thought of killing his best friend but had concerns because he was too big.
“I singled out his little brother and went into his room while he was asleep,” he said.
“At the time, there was no feeling. I was asking myself why am I standing over him? What am I about to do?
“I put my hand over his face, and I stabbed him.”

Shultz said he confessed to detectives and stressed that the stabbing was not premeditated.
After the killing, Shultz said he drove to the hospital, where he was later handcuffed by police to his bed.

He said he considered driving to his dad’s house to shoot himself.
“But then no-one could make sense of why I killed my best friend’s little brother,” he said.