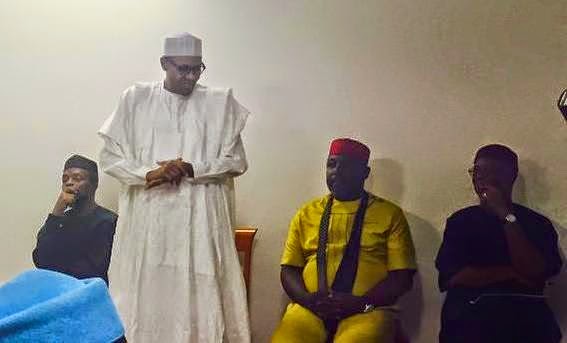 My hand no dey for this one o..lol. Saw it on Nigerian Tribune and it’s juicy. Read below…

President-elect Buhari appeared to have dashed the hopes of the governors elected on the platform of the APC when he rejected their plans to submit a ministerial list to him.

The APC governors, led by Governor Rochas Okorocha of Imo State, had, last Tuesday, visited Buhari in Abuja to pledge loyalty and make some demands. At the meeting, some requests were placed on the table openly, while the request to drop the list of possible ministers came up for discussion behind the closed door.

Sources close to the meeting between the governors and General Buhari indicated that the state chief executives came out of the visit with heavy minds.Planning to maintain the tradition already instituted by the Peoples Democratic Party (PDP) where the state governors as party leaders in the states are requested to submit list of possible ministers and Ambassadorial appointees to the president, the governors threw the request at Buhari.But it was learnt that the General rejected the proposal and declared that the Constitution does not mandate him to take a list of ministerial nominees from them.

The president-elect was also said to have rejected the call for a bailout for the states that have been unable to pay salaries, with a source informing Sunday Tribune that the General flatly rejected the proposal, saying the he was aware the Federal Government was not owing the states their allocations.

A source close to the discussion told the Sunday Tribune that General Buhari told the governors that those of them in their second terms could not complain about the state of government finances, as they have all been collecting allocations from the Federal Government all along.

The source quoted Buhari as saying that “I do not think we can discuss that issue of Ministerial list. The Constitution clearly does not mandate me to take a list from the governors. To me, the governors should concentrate on getting good hands to help them in discharging their duties in the states.”