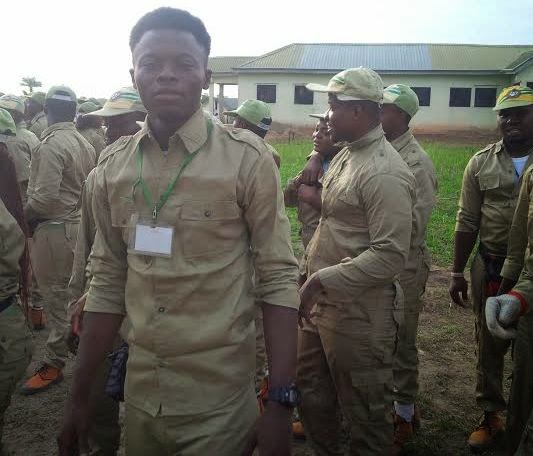 One of the Batch A Corp members currently in Nasarawa state Orientation Camp yesterday almost lost his life at the camp due to extreme torture by security operatives. The Corp Member Bunmi Adeyera (pictured above) with the State Code: NS/15A/0134 and Call-up no: NYSC/NIJ/2015/061287 who is said to be sick was today locked-up in the guard room for hours until he collapsed and became unconscious in the Guard room.

An eyewitness who pleaded anonymity has full details. Read excerpts below:

“To all my fellow NYSC corp members around Nigeria, today, I witnessed how one of my colleagues,  Adeyera Oubunmi  (State code: NS/15A/0134)(Call-up no.: NYSC/NIJ/2015/061287) almost died due to maltreatment in Nasarawa state NYSC camp by security officials.

What happened this morning was that Bunmi Adeyera who is also Platoon 4 leader and was obviously sick went to the Camp clinic to collect some drugs to combat his ailment and was approaching the camp market to get food (since food was no longer available in the camp kitchen) in order to use his drugs when he was stopped by security operatives (Nigerian Police force and Man’O War) and was asked to go back into the camp hall for lectures. He tried explaining to them that he was sick and needed to take his drugs but they did not listen to him, rather he was told to start ‘frog-jumping’.  Bunmi quietly explained to them that he might not be able to ‘frog-jump’ because of his health status.

The next thing I saw was that the security operatives (who were obviously Hausas, because they communicated fluently in Hausa language) told asked him if he was Hausa or Yoruba. When he told them he was Yoruba and he hails Lagos state, they seized his NYSC identification tag and marched him straight to the ‘Guard room’ allegations of ‘being stubborn’ without give him any chance of speaking in his own defense.

This place called Guard room is a bathroom located at the entrance gate of the Nasarawa Camp where soldiers urinate at all time and with no cross-ventilation.

We all watched them take the poor sick Corp member to the Guard Room, and was detained there going to three hours. The next thing I saw was people from the camp medical unit running towards the gate with stretcher in their hands. Behold Bunmi had collapsed and fainted in the so-called guard room.

Even while the Red Cross team was trying to rescue the situation, the soldiers sent them back saying that all was pretence and that when he wakes up, he will return to the guard room.

The doctors battled for his life for about an hour before Bunmi Adeyera became conscious again and was later stabilized.

Every Corp member on Camp including NYSC officials know Bunmi to be easy-going, obedient and friend to all which is more reason he emerged the leader of Platoon 4.

The population of those who went to the clinic to check on him is one that I have never seen on camp although they wouldn’t allow us take pictures of this ugly incidence.

But my question is this why is it that we Corp members who have in good faith and humility come to serve our father land are being maltreated even to the extent of someone fainting. This should not continue.”