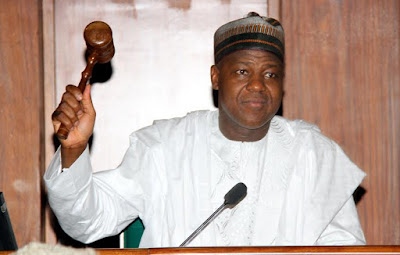 Speaker of the House of Representatives, Yakubu Dogara, has threatened to expose all those, irrespective of their social stand, that are indicted in the N1 trillion rail contract scam. Dogara said this yesterday December 10th while declaring open the ongoing investigative hearing into the railway scam that ran into billions of US dollars from 2010- 2015.

“In line with the anti-corruption stance of the present APC government and the Legislative Agenda of the House, this Ad-hoc Committee must ensure that the billions of US dollars spent on the contracts for rehabilitation and maintenance of rail tracks, construction of standard gauges, bridges, procurement of locomotive wagons and coaches from 2010 – 2014, answers to the value for money expectations of Nigerians. There must be no sacred cows and the Ad-Hoc Committee must not take prisoners by not only calling a spade a spade, but by also exposing corruption in the process and all those who have misappropriated or misapplied railway funds or assets. In line with our commitment to support the present administration in the ongoing war against corruption, the Ad-Hoc Committee must not fail to utilise its powers under Section 89 (d) of the 1999 Constitution, should any person fail or refuse to respond to its summons. In such cases, referral should be made to the House to cause a bench warrant to be issued against them so that such person(s) who are still in deep slumber may know that change has come to Nigeria. The constitution empowers us to compel the attendance of any person or authority in Nigeria no matter how highly placed, which is a very potent tool. I assure you this time around that no such person(s) will have a president to run to for a cover or protection from appearing before you to answer questions regarding allegations of corruption against him or her,” he said

“We must note, however, that this investigation is not a witch-hunt of any person. Indeed, we have no scores to settle with anybody. The only scores we have to settle is against corruption, inefficiency or waste in administration of funds belonging to Nigerians. We are only performing our sacred constitutional duties,” he said