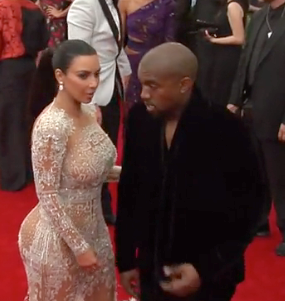 I saw the photos and they looked happy but some keen observers say they detected friction between Kanye West and his wife Kim Kardashian on the 2015 Met Gala red carpet.

According to tell OK magazine

“At one point, when Kim reached for Kanye’s hand, he moved away to pose for photos! He also briefly left her on the red carpet to talk to another attendee while Kim continued to pose for the numerous photographers. As the couple headed inside, Kanye didn’t look like he wanted to pose with his wife, and photographers had to literally scream and beg him to turn back towards the cameras and face in the same direction as his curvy wife.”

Check out the video below