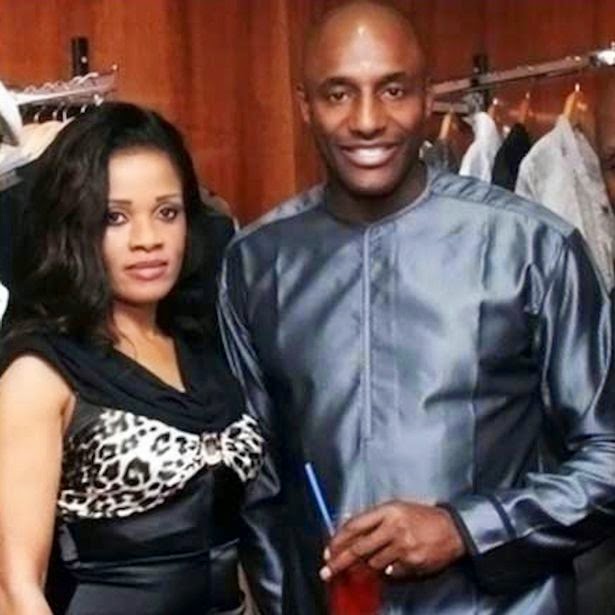 In 2011, former footballer John Fashanu married Abigail Igwe, Adaeze’s mother (read here) fast forward to 2015 and John, 52, claims Abigail tried to kill him after she found him having a threesomeUK Mirror reports

Soccer legend John Fashanu has accused his wife of trying to kill him – after she allegedly found him bedding two women at the same time. The retired former Wimbledon and England striker said estranged Abigail Onyekwelu went for him with a knife during a furious row at their home.

Fashanu, also a former Gladiators host, is now at the centre of a bitter divorce battle with Abigail – and insists she cheated on him with a woman. She denies his claims and the ­astonishing battle – which includes the ­accusation that he bedded their maid – is to be played out in the high court in Abuja, Nigeria.

But Fashanu, 52 – dubbed Fash the Bash for his hardman reputation in Wimbledon’s famous “Crazy Gang” – hit back with an extraordinary series of allegations.

He said he had to call in police to protect him from knife-wielding Abigail and was devastated to find her in bed with another woman.

He also alleged that she stole thousands of pounds in cash from their marital home.
Speaking exclusively to the Sunday People the star – who now presents the Nigerian version of TV’s Deal or No Deal – said: “She attempted to use knives on me. It was terrifying.
“My life was at stake, there’s no two ways about that.
“Even if you did think I was sleeping with the maid, or even if you thought I was sleeping with Miss Nigeria, don’t kill me! Just leave me and go. The ­violence was just too much.”

6ft 2in Fashanu added: “My life was at risk and I didn’t want it to happen again. That’s why I filed for divorce.”
He denied his wife’s claim to have discovered him in bed with two other women – one of them their maid.
“I’ve been very fortunate to date some of the most beautiful women in the world,” Fash insisted. “I certainly don’t have to sleep with my cleaner!
“This is me, John Fashanu, you’re talking to. It’s absolute nonsense. If she wants to make up that ­story, at least let her say it’s Beyoncé or someone.
“Don’t say it’s my cleaner, that’s just b******s. It’s not true at all.
“The truth is she’s been cheating on me with a woman she calls her spiritual partner.
“I caught them in the bed many times. That was why I kicked her out of my house.”

Abigail is the mother of former beauty queen Adaeze Yobo. Fashanu met her in 2009. They married two years later but the relationship hit the skids last year.

Father-of-five Fashanu claimed police are now investigating an attack on him. He also ­alleged that officers are trying to retrieve missing cash from Abigail.

He said: “I’m the one who is filing for divorce. I couldn’t stand her and, to be honest, she probably couldn’t stand me. With Abigail it was just money, money, money.
“I’ve never seen a woman who has such an appetite for money. Nearly one million Nigerian naira (around £3,300) was stolen from my house in Abuja. There are police reports you can see.
“There were so many assaults, it was just getting too much. It was absolutely ridiculous. She attacked me on multiple occasions. The whole situation was far too hot for me. There are some wonderful, wonderful women. It’s just that I met the wrong one.”

The mother of four said: “John’s saying I tried to kill him? Oh my God, this is so funny. I don’t quite ­understand all this.
“How can I kill him? How can ­somebody like me kill this huge man who is an expert in karate. I don’t ­understand how I can kill him.”
Told that he had accused her of going to his house armed with knives before trying to attack him, Abigail retorted: “Oh my God, that is ridiculous.”
She also rejected Fashanu’s claim that he threw her out of his house
after finding her in bed with another woman.

Abigail said: “He didn’t kick me out of his house. We were living in my house. He couldn’t have kicked me out of my own house – I kicked him out.”

Of the woman concerned, she ­insisted: “She is a good friend to me. She has a husband and children. It is ridiculous. She was living with me for a while to get back on her feet.”
Abigail went on: “I caught him in bed with two women, the housemaid and one other woman. There were two women, it was awful.
“They were on the bed. They were undressed. I said to them, ‘Who are you and what’s going on here?’
“He told me that he doesn’t know what he’s doing and I should pray for him. He knows how to manipulate people, that’s one thing he is good at.
“I last saw him in April last year. I didn’t know he’d filed for divorce. He has been calling people asking them to plead with me to get back with him.

“I would have filed for divorce myself but I haven’t because I’ve been very busy. And he asked me not to because he did not want to make it known that we had separated.
“So I went on my way and I left him but I didn’t tell anybody anything.
“I’ve told him, ‘I don’t want you any more, I have forgiven you, I’m a Christian. But I don’t want you any more, just leave me alone.’

I don’t take him seriously. I don’t have time for him. If I should be angry at anyone, I should be angry at myself for descending so low as to enter into marriage with such a person.”
Responding to claims she stole money from Fashanu, Abigail added: “Anybody can say anything – but how can I go to his house and steal from him in his house?

“I wasn’t living there with him. He’s sick and he needs help.”

“I filed the ­divorce petition in September and it’s listed for mention on the 19th of next month at the court in Abuja. We’re trying to move it through.”