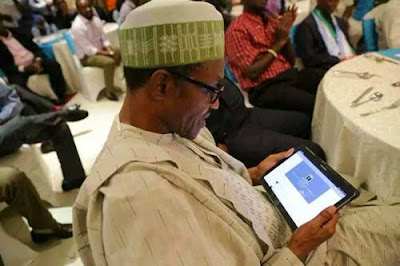 In your opinion, do you think General Buhari is ready for you people, the internet generation? Can he handle you lot? Do you think he’s ready for social media, free speech and democracy? I ask because I saw an interesting article on Sahara Reporters by a guy named Paul Omoruyi where he asked really important questions regarding the president-elect and new media.
Some of what he wrote below…

Buhari’s government had a bad rap sheet for purportedly using military decree (the popular Decree 4) to incarcerate two Guardian Newspaper writers, Ndukar Irabor and Tunde Thompson. Although it appears Nigerians have “forgiven” the General for some of those undemocratic measures of the past, the question now is: can “President Buhari” take the same “social media inferno” that President Jonathan was baked in throughout his presidency? Can President Buhari come to terms with the new social media world? One thing is certain; Nigerians will use social media to caricature him, probe his government and hold him accountable for those he surrounds himself with.

How would Buhari react when Nigerians call him names, criticize his government and policies and make mockery of Aisha on social media? If Buhari’s response to AIT covering his inauguration ceremony is anything to go by, it appears that the president-elect is not ready for the new world of media criticism.

My advice to the Buhari’s team is that they start to sensitize him and prepare him for the social media storm that awaits him because he will not be getting a “free pass”; not anytime soon. I wish the new president a successful presidency. Do not forget that Nigerians are counting on you to fulfill the promises for their electing you. If President Buhari betrays the trust of the Nigerian people, APC as a party will pay dearly for it in four years!