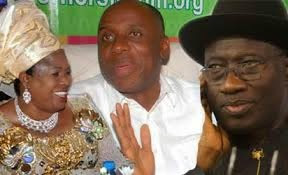 Rivers state governor, Rotimi Amaechi says despite the effort by First Lady Patience Jonathan and the president to remove him from office, they are all leaving government at the same time. He said the president and his wife had wanted him to leave office before the end of his tenure but he is now seeing the end of his administration.While speaking at the presentation of a special documentary titled ‘The Amaechi Years’, the governor said Patience Jonathan interfered with operations of the military apparatus in the state, ordering the transfer of military officers in the state just because they greeted him.

The more she did that, the more the President turned his back, and the more I fought because I felt that such a system is not a system that will make Nigeria grow. Why I agree with my friends who says forget the past because it is gone, I think it is a lesson. Governance is about the man that has been elected and he has the responsibility to deliver services to the people. There was a time when it was everywhere that the Supreme Court will remove Amaechi. That was on until we defeated them at the Supreme Court. I told the Rivers people to go about their business because I have finished praying and that President Jonathan cannot remove me. We are leaving at the same time. They didn’t want me to stay to the end, but here I am staying till the end.”he said