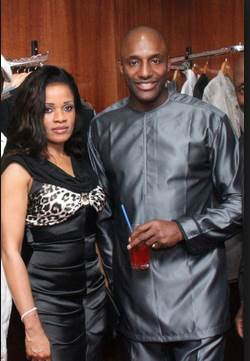 Hmm, wahala dey! According to some new story I just received from an insider, the marriage saga between John Fashanu and Abigail Igwe has taken another dimension. John’s embattled ex-wife, Abigail yesterday stepped up the game with a move to get the popular sports Ambassador arrested over fabricated issues relating to football fraud and possession of gun.In my source’s words:

According to a petition written to the police by the ‘black widow’, it states that John Fashanu is in possession of an unlicensed gun and has also plotted moves to send footballers abroad without passports. The petition which was an obvious antic to implicate Fash is not only misleading but a cheap move to blackmail the sports icon.

I spoke with the Head of Media to John Fashanu, Mr Micheal Success and he said:

“This is another frustrated trick by Abigail, my boss ex-wife to bring him down. Yes Fashanu was invited to the Central police station based on the petition but he was able to clear the air. It’s true the company has a licensed gun for protection over attacks like this from a frustrated woman.”

Michael added that the case of sending footballers abroad without passport is unfounded and unspeakable. He further lamented the unforeseen dangers and threats from the embattled ex- wife of Fashanu towards the Ambassador, as the desperation to bring Fashanu down is indeed shocking.

The family and relations of Fashanu have expressed concerned  over the safety of their son based on the unrelenting move of the ex- wife to drag his name to the mud.

“Fashanu is known all over the world and his positive antecedents in sports development in Africa speak volume of his personality, I won’t be surprised if Abigail accuses him of kidnapping soon because an old woman is never old when it comes to the music she knows how to dance very well”, Micheal Success said.