MaDailyGistGet the Latest Gist in Town
More
GOSSIPGet Daily Gist
More
Home Politics 2015 general elections: I hope my wife will not divorce me –... 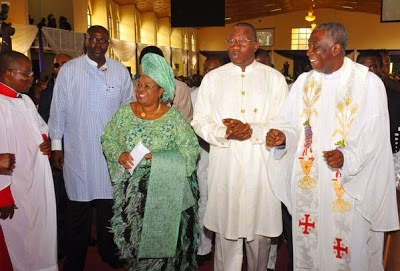 Speaking at the thanksgiving and farewell service organized for him today, President Jonathan said he hopes his wife will not divorce him just as the former South African leader, F.W de Klerk’s wife left him when he chose to abolish minority rule in South Africa, a decision he took for the greater good of South Africa. Pres. Jonathan was speaking against the backdrop of his decision to concede defeat after the presidential elections. He said such decisions come with its consequences. He sympathized with his Minister and aides for the persecution they will face as they also leave office come May 29th.

‘I believe there are reasons for everything. Some hard decisions have their own cost. That I have ran the government this way that stabilized certain things,  the electoral process and other things that brought stability into this country. They were very costly decisions which I must be ready to pay for. Some people come to me and say this or that person is he not your friend that benefited? Is it not your government that this person benefited from? But this is what the person is saying. But I used to say worse statements will come. If you take certain decisions, you should know that those close to you will even abandon you at some point.And I tell them that more of my so-called friends will disappear. When F.W de Klerk took the decision to abolish minority rule in RSA, even his wife divorced him. I hope my wife will not divorce me. But that is the only decision that has made RSA to still remain a global player time. If we still had that minority rule there, by this time, nobody will be talking about RSA. If you take certain decisions, it might be good for the generality of the people but it might affect people differently. So for ministers and aides who served with me, I sympathize with them, they will be persecuted. And they must be ready for that persecution” he said

He appreciated God for being with him and his family.

“Very few of those in my age brackets have been that lucky. All through my education were on government scholarships. I have not suffered lack not because I’m hard-working but by God’s grace. When I look at the whole picture of my life up to when I became the president of this country. And I say that if  soldiers and police officers that have not received 0. 5 per cent of the benefits that I have received  from the state can lay their lives for  this country, I should  do anything in the interest of Nigeria including paying the supreme price. As long as live, I will continue to do my best for the state because the state has helped me as a person. I have to thank Nigerians especially my state for giving me  the opportunity to serve as deputy governor and the whole country gave me the opportunity to serve as Vice President and then president, first was to complete the tenure of the late president and later serve as president from which I am exiting now as a very happy and fulfilled man”.